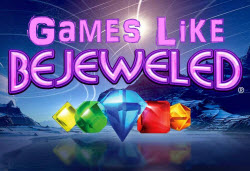 
Bejeweled is a tile-matching puzzle video game by PopCap Games, first developed for browsers in 2001. Three follow-ups to this game have been released. More than 75 million copies of Bejeweled have been sold, and the game has been downloaded more than 150 million times.

If you can think of more, then don't forget to mention it in comments.