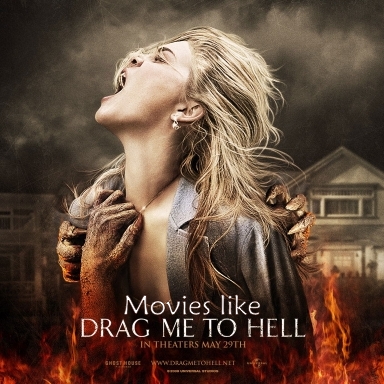 Like watching horror movies like Drag Me to Hell? then check this list of recommendations for movies similar to Drag Me to Hell. It is a 2009 horror movie, directed by Sam Raimi who directed the famous Evil Dead series. The story of the movie follows Christine Brown (Alison Lohman) a loan officer who becomes the victim of an supernatural curse when she refuses to extend the loan to Mrs.Ganush (Lorna Raver). She now has only three days to break the curse before the evil spirit drags her into the hell and steal her soul. Don't forget to mention if we miss any other similar films as we keep on updating this list.

Movies Similar to Drag Me to Hell

Some more horror films like Drag Me To Hell you may enjoy watching:

Mirrors,
Sinister,
The Omen,
Let Me In,
Red State,
The Grudge,
Dead Silence,
The Haunting,
28 Days Later,
Trick 'r Treat,..........if you can think of more, then don't forget to mention it in comments.