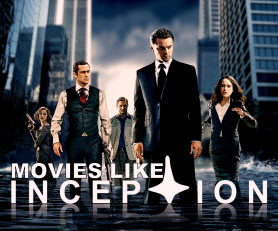 Check this list of recommendations for movies like inception here. Inception is a 2010 sci-fi thriller written, co-produced, and directed by Christopher Nolan. The film follows Dom Cobb played by Leonardo DiCaprio, an extractor who performs illegal corporate espionage by infiltrating the subconscious of his targets to extract valuable information. He is approached by the wealthy Mr. Saito (Ken Watanabe) to performing the act of inception, to implant an idea into his target's subconscious. If you like the more movies similar to inception then find the recommendations for it below and don't forget to mention if we miss any as we keep on updating this list.

The Matrix is a 1999 science fiction action film directed by The Wachowski Brothers. Set in dystopian future the movie follows Neo (Keanu Reeves), a computer hacker who joins a rebellion against the machines after knowing that his everyday world is the product of a computer-driven digital matrix created by sentient machines.

Shutter Island is a 2010 psychological thriller by Martin Scorsese starring Leonardo DiCaprio and Mark Ruffalo. Set in 1954 the movie follows Two U.S. Marshals Teddy Daniels and Chuck investigating the disappearance of Rachel Solando (Emily Mortimer) a murderess from the asylum on Shutter Island.

Source Code is a 2011 science fiction time-travel film directed by Duncan Jones. The movie follows Captain Colter Stevens (Jake Gyllenhaal) who awakes in the body of a train commuter as an experimental government program called the “Source Code” must find the bomber of a commuter train within 8 minutes to prevent a second terrorist attack.

Gattaca is a 1997 science fiction directed by Andrew Niccol. The movie follows Vincent Freeman (Ethan Hawke) an genetically inferior man assumes the identity of a genetic elite to pursue his dream of space travel with the Gattaca Aerospace Corporation.

Minority Report is a 2002 sci-fi thriller by Steven Spielberg. Set in 2054 the movie follows John Anderton (Tom Cruise) a PreCrime officer accused of a future crime must prove his innocence.