Home » Erotica » Movie Recommendations »14 Movies Like What Every Frenchwoman Wants 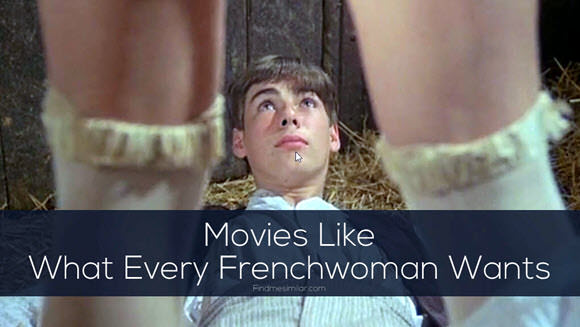 What Every Frenchwoman Wants (aka 'Exploits of a Young Don Juan', 'Les Exploits d'un Jeune Don Juan' and 'L'iniziazione') is a 1986 softcore coming of age erotica written and directed by Gianfranco Mingozzi. The movie is loosely based on Guillaume Apollinaire's novel Les Exploits d'un jeune Don Juan.

The film follows Roger (Fabrice Josso) a 16 year old who comes to his home for vacation after three years and finds its filled with many beautiful women. Rogers plans to loose his virginity and tries many efforts for it with out finding success. However during World War 1 when Germany declares war on French all the men are sent to the trenches leaving Roger the only man among the house full of beautiful Women.


With no men around Roger gains confidence and fulfills his dream of loosing virginity. He soon impregnates the maids (Serena Grandi, Rosette), his aunt (Berangere Bonvoisin), sister (Alexandra Vandernoot) and many more. When he finds out some of them are pregnant he desperately tries to marry them off with other men avoiding further scandal. The movie sure has fair amount of female nudity but it isn't too overboard and the theme of the film is light comedy making the film very successful.

If you have watched the film and loved it below is the list of movies similar to What Every Frenchwoman Wants. These recommendations are factored on different aspects such similar themes, story, coming-of-age erotica's etc. Please let us know if we may have missed out any film that's similar to Exploits of a Young Don Juan so that we may update our list.

Movies Similar to What Every Frenchwoman Wants:

Tendres Cousines (1980)
When watching this movie the first thought that strike me was did Gianfranco Mingozzi took this film as an inspiration for What Every Frenchwoman Wants? Because both movies focuses on sexual awakening of a teenage boy during the war times. In both films the adolescent boys are attracted to adult woman and uses the unavailability of adult men around due to the war for their sexual adventures.

Since Tendres Cousines was released 6 years earlier than What Every Frenchwoman Wants, the later  is visually more appealing and has great production values in comparison.

Malèna (2000)
This is coming-of-age drama about a 13 year old Renato (Giuseppe Sulfaro) who is obsessed with Malena (Monica Bellucci) and follows her around the town in his bicycle and spying her. He soon discovers that he is not the only one obsessed with her and finds out the harsh reality of the war which changed her life completely. The film is similar to What Every Frenchwoman Wants in terms of the coming of age theme and the war settings.

The Reader (2008)
The movie follows Hanna Schmitz (Kate Winslet), a beautiful Mid 30s tram conductor having a sexual affair with a 15 year old Michael Berg (David Kross). During their inappropriate relationship Hanna who loves good literature makes Michael read a book to her every time they meet followed by her teaching the young boy all about sex.

The affair doesn't last long as she suddenly disappears. Eight years later we see her again but this time she is on trial for the death of innocents during her time as a death camp guard. She has another secret which she doesn't like to reveal however the adult Michael who followed he trial discovers it. Its an amazing movie with brilliant performances from all the actors.

All Things Fair (1995)
Set during the world war two where adults were sent to trenches to die while others are left in a crumbling society. The film All Things Fair (Lust och fägring stor) follows Stig (Johan Widerberg), a 15 Year old who falls in love with his 37 tear old teacher Viola (Marika Lagercrantz). Viola is married to an drunk and unfaithful husband whom she hates and thus starts an affair with Stig. This forbidden relation brings the unexpected consequences to them.

In Praise of Older Women (1997)
In Praise of Older Women (En brazos de la mujer madura) is a 1997 adaptation of Stephen Vzinczey's novel with the same name. Set in the Spanish Civil War the film follows young Andres (Juan Diego Botto) who sets out to find his mother finds his sexual awakening during a series of relationships with mature women's on his way.

More films similar to What Every Frenchwoman Wants: