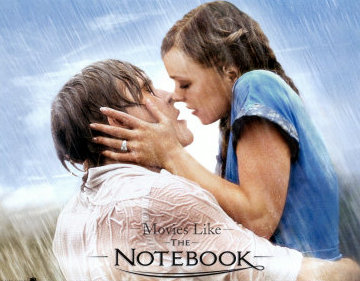 The Notebook is a 2004 American romantic drama film based on the novel of the same name by Nicholas Sparks directed by Nick Cassavetes. The story is set in early 1940s where a poor and passionate young man falls in love with a rich young woman and gives her a sense of freedom. They soon are separated by their social differences. If you are looking for romantic movies like The Notebook then find the recommendations for it below and don't forget to mention if we miss any as we keep on updating this list.

Movies Similar to The Notebook (2004)

Titanic is an romantic disaster movie by James Cameron that showed the maiden voyage of ill-fated R.M.S. Titanic with a beautiful love story of a rich women (Kate Winslet) falling in love with a poor artist (Leonardo DiCaprio) both from different social classes.

A Walk to Remember is a coming-of-age romantic drama by Adam Shankman based on the bestselling novel of Nicholas Sparks with same name. The movie portrays the unconditional love story of two high school seniors (Shane West and Mandy Moore) with different lifestyles.

Blue Valentine is a romantic drama by Derek Cianfrance that charted relationship of a married couple (Ryan Gosling and Michelle Williams) from a promising beginning to its Crumbling ending over a span of several years.

10 Things I Hate About You is an Modern adaption of Shakespeare's "Taming of the Shrew" where a new kid must find a suitor for the meanest girl so that he can go on a date with her sister.

P.S. I Love You is a romantic drama by Richard LaGravenese tha telle the story of a grieving widow who finds that her late loving husband has left her a series of tasks to perform to get over him and start over again.


More films like The Notebook (2004) you may enjoy watching:

Get latest game, anime and movie recommendations directly via Email
10:49 AM
Admin