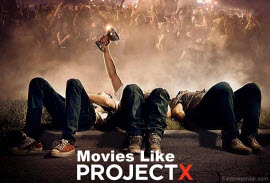 Project X is a 2012 comedy film directed by Nima Nourizadeh. The story follows 3 anonymous high school seniors Thomas (Thomas Mann), Costa (Oliver Cooper) and J.B. (Jonathan Daniel Brown) who plan to throw a birthday party that no one will forget. As the night progresses, word spreads and things go out of control. If you like teen movies like Project X then find the recommendations for it below and don't forget to mention if we miss any as we keep on updating this list.

Superbad is a 2007 American comedy film directed by Greg Mottola and starring Jonah Hill and Michael Cera. Two co-dependent high school seniors are forced to deal with separation anxiety after their plan to stage a booze-soaked party goes awry.

The night before his big medical school interview, a promising student celebrates his 21st birthday with his two best friends.

21 Jump Street is a 2012 action-comedy movie directed by Phil Lord and Chris Miller based on an 1987 TV series of the same name. The story follows two underachieving cops (Jonah Hill and Channing Tatum) who are assigned an undercover operation of busting synthetic drug ring posing them as high school students.

A wild weekend is in store for three high school seniors who visit a local college campus as prospective freshmen.