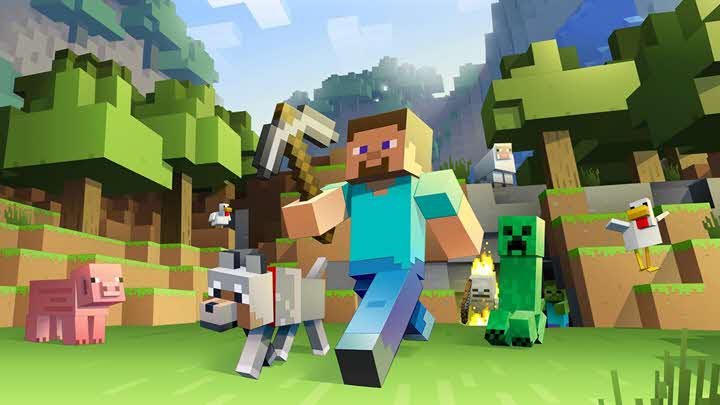 Our adventure begins at a point in the world of Minecraft where we seem to have appeared by spontaneous generation. It doesn't specify what you have to do or should do at first but this is one of the most attractive aspects of the game as this gives you the great freedom to do what you want. Start exploring, start gathering materials, start building a house. Venture in the mine, or simply walk around with no purpose.

But be careful, when the night comes, you can get attacked by zombies, so prepare accordingly. When the morning arrives there are still some monsters, in your hand you hold a wooden shovel with stats in the middle and your shelter was destroyed by a creeper that attacked you from behind, now you are ready to face the most overwhelming element of the game: the possibilities.

You can build the famous buildings with steel cubes that you'll get by mining for days or travel to the Nether and gather what you need to create a boss and defeat him or simply be a nomad that travels the world exploring caves and climbing mountains; nobody forces you to do anything but you and your ambition.

Here are more cool games like Minecraft you should really enjoy if you love this type of gameplay that involves building, researching and surviving in that particular world:

Eco is a game that takes everything you love about Minecraft and takes it a step further. From economy to building, from government to ownership and from agriculture to commerce, there is a lot to do and enjoy. Building is more complex but also greatly rewarding, and there is the extra incentive that you cannot die.

The goal is to be as successful as you can, or as little as you want. As always, it’s up to the player to take the decisions and actions he or she wants. You do need however to collaborate with others, giving the game a whole new dimension where you can influence others and they can influence you. If you love games like Minecraft you absolutely need to try Eco ASAP!

Trapped on a planet where underwater life wins by a landslide, Subnautica proposes us to survive in one of the most mysterious and threatening environments that humanity has ever faced. Immense and overwhelming marine depths in which to obtain resources, advance in the food chain and, if you are lucky, be able to escape from there alive.

In Subnautica you have to survive, yes, but you also want to keep growing at a technological level so that, for example, you don't have to worry about hunting for food or looking for materials that allow you to hydrate.

What starts as a small base in an escape capsule, can soon become a whole underwater facility that is powered by nuclear energy, contains gardens with a constant production and a desalination plant that feeds you with drinking water 24 hours a day. For fans of games like Minecraft this is like Minecraft underwater, with really cool graphics.

Craft the World is a strategy game, in a Sandbox type world. In it, the player controls a group of Dwarves with which he can explore, fight enemies, accumulate resources, design his base/home and elaborate different items (potions, furniture, weapons, armor, etc.) to help him in this task.

You start with only one Dwarf to perform the tasks, but as you progress, more Dwarfs will appear for you to control. You can control a single Dwarf directly or you can give general instructions and the Dwarves will work on them.

When you click on a resource the Dwarves will go and collect it, for example, the trees will be cut down and provide you with Wood, Resin, Pineapple, Apples and other things depending on the type of tree. A different take on games like Minecraft that a true fan of the genre will enjoy for days, weeks and very likely months on end.

A video game with an aesthetic as colorful as Rust's, without living dead, nightmare creatures or anything like that, can be one of the most terrifying titles on the market today.

But that's the way it is. The extreme survival adventure of the creators of the popular Garry's Mod, which after years of being available as a game with early access finally releases its final version, is a maddening, brutal, wild title that has no mercy or regard for the fans who accept its great challenge: to survive.

And it's very scary, because of the ease with which, in one stroke, you lose your life and all your possessions, leaving you literally empty-handed, with nothing to do but try again, to fight to hold on, this time, for a little longer. It is an anguishing, terrifying sensation, which grips your heart as few games do. This is 3d Minecraft on steroids with amazing graphics where you pray you kill other players before they kill you.

The inspiration in Minecraft to create Terraria is clear and direct. There are no half measures here. The three main game dynamics of this game persist in this two-dimensional wonder: the gathering of resources, the "crafting" of tools or artifacts and the manipulation/construction of the environment.

Although in Terraria there are certain objectives that can be considered milestones within the adventure, the game is 100% a pure and endless sandbox. Because there is no progressive learning system, the player is forced to do their part and strive to understand how their environment works. This learning can be quick and haphazard or acquired through trial and error. That is why each user will have a different experience depending on their personality and decisions.

There are some players who will decide first to explore the world from one end to the other on the surface, or others, who when starting their game will start digging into the depths of the earth. Another must play for anyone who is a fan of games like Minecraft. Beware that this game is also known to make you addicted and have you play for months and even years. You have been warned!