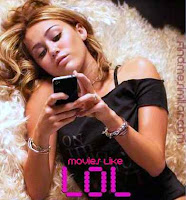 LOL is a coming of age teen comedy movie directed by Lisa Azuelos. Lola (Miley Cyrus) is a Seventeen-year-old teen who's life has become messy due to the recent breakup with her boyfriend and she finds it hard to balance between friends, family and love. If you like watching teen movies like LOL find the recommendations for it below and don't forget to mention if we miss any as we keep on updating this list.

What If is a 2013 romantic comedy that follows a medical school dropout Wallace (Daniel Radcliffe) searching for finding a perfect partner after being in a lot of failed relationships. He then becomes friend with an animator Chantry (Zoe Kazan) who is already in a live in relationship with her long time boyfriend Ben (Rafe Spall). But can they both be just friends..?

Stuck in Love is a 2012 romantic drama about a acclaimed writer Bill Borgens (Greg Kinnear) who couldn't write a single word in the last 3-years after his divorce and how he and his family comes in terms with love over the course of a year.

Mean Girls is a 2004 teen comedy that follows a 16 year home-schooled girl Cady (Lindsay Lohan) attending a school for first time and her clash with 'the Plastics', the school's most popular clique.

Thirteen is a coming-of-age drama about a thirteen year old Tracy (Evan Rachel Wood) whose life is changed completely after being introduced to sex, drugs and crime by her friend Evie (Nikki Reed).

She's the Man is a 2006 romantic comedy which follows Viola (Amanda Bynes) as she takes the identity of her brother and joins a soccer team in there. But she doesn't know that she's going to fall in love with her soccer teammates Duke (Channing Tatum).