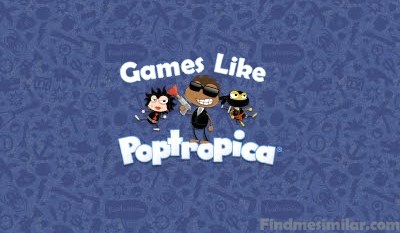 Poptropica is an online, role-playing game owned by Pearson PLC, the global publishing and education company. It was made by Jeff Kinney, the author of the Diary of a Wimpy Kid series. The site is aimed at children ages 6 to 15. Players can go to different islands, compete in multiplayer games, and communicate with each other. Players are given several quests, called islands, which they are encouraged to complete. If you are a fan of virtual role-playing games like Poptropica and looking for more games with similar gameplay then find the recommendations for it below and don't forget to mention if we miss any games as we keep on updating this list.

Club Penguin is a massively multiplayer online game (MMO) involving a virtual world containing a range of online games and activities, created by New Horizon Interactive. Players use cartoon penguin-avatars and play in a winter-set virtual world. Club Penguin was made available to the general public on October 24, 2005 and has since expanded into a large online community growing to the extent that by late 2007, it was claimed that Club Penguin had over 30 million user accounts.

Moshi Monsters is a website aimed at children any age with over 80 million registered users in 150 territories worldwide. Children choose from one of six virtual pet monsters (Diavlo, Luvli, Katsuma, Poppet, Zommer and Furi) that they can create, name and nurture for. Once their pet has been customized, players can navigate their way around Monstro City, take daily puzzle challenges to earn ‘Rox’ (virtual currency); play games; personalize their room and communicate with friends in a safe environment.

Pixie Hollow is a  massively multiplayer online role-playing game where you can create your own fairy character like Fairy(Female) or Sparrow Man(Male) to play games and interact with friends.

Woozworld is an exciting, fun, and unique virtual world and social network for tweens and teens. Here you can Create an avatar, your own look, design your place, set new trends, throw amazing parties and games, compete in awesome contests, even run your own business.