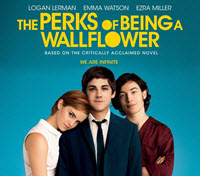 
Movies Similar to The Perks of Being a Wallflower:

500 Days of Summer is a nonlinear romantic comedy movie directed by Marc Webb. The story is based on the memories of Tom's (Gordon-Levitt) failed relationship with Summer (Deschanel) who doesn't believe in true love.

It's Kind of a Funny Story is an coming-of-age comedy directed by Anna Boden and Ryan Fleck based on Ned Vizzini's 2006 novel with the same name. The movie follows Craig (Keir Gilchrist) a 16-year-old clinically depressed teenager who realizes he's suicidal and checks himself into an adult psychiatric ward where he finds an opportunity to begin anew.

The Breakfast Club is a 1985 American teenage comedy film written and directed by John Hughes. The story is about 5 high school students each a member of a different high school clique with different stereotypes, meet in detention and come to realize that they are all have a lot more in common than they thought.

The Art of Getting By is a 2011 romantic comedy movie starring Freddie Highmore and Emma Roberts. The story follows George (Highmore) a fatalistic teenager who hasn't done a real day's work in his entire senior year befriends beautiful and complicated Sally (Roberts) who makes his world upside down.

Juno is a 2007 comedy drama directed by Jason Reitman. Juno MacGuff (Ellen Page) is a cool, confident and  independent-minded teenager when faced with an unplanned pregnancy, she sets out to find the perfect parents for her baby.


More movies like The Perks of Being a Wallflower:

Get latest game, anime and movie recommendations directly via Email
10:23 AM
Admin