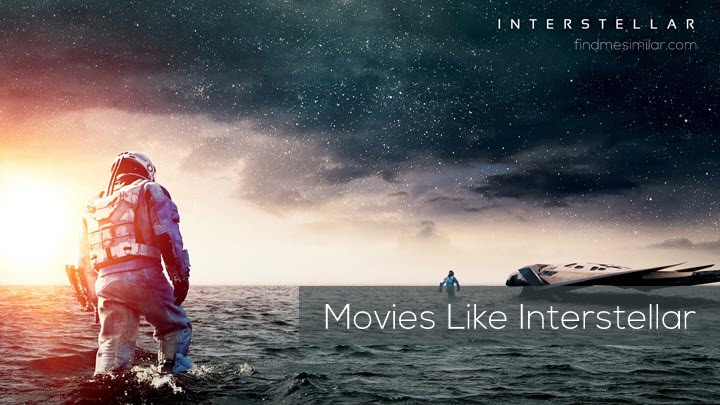 Interstellar begins at a pre-apocalyptic point on Earth, where the planet's lifestyle has changed dramatically: tied to the production of grasses (wheat and corn), sandstorms and the eventual extinction of humanity through starvation.  However, Cooper (Matthew McConaughey), an ex-pilot who, through some mysterious clues in his home, comes across the remnants of NASA, who are searching for the hope of humanity by launching a new space mission to find habitable planets.

The crew will face incredible challenges, exploring the unknown and encountering problems of the most unpredictable kind. This movie is about the mystery box. What is the universe all about, and how man can succeed in even the toughest of circumstances, across space and time. Movies like Interstellar are about space exploration, space travel, facing previously unknown challenges and the toughest of decisions.

1. The Martian (2015)
During a mission on Mars with a human crew, astronaut Mark Watney (Damon) is considered dead, the victim of a severe storm. But Watney survives the urge and discovers that he was left alone on the planetary hostile. With insufficient supplies, he has to make the most of his ingenuity, intelligence and inner strength to stay alive and find a way to get his message of help to reach Earth. Millions of miles away, NASA and the international team of scientists are constantly searching for the solution to bring 'Martian' home, while his teammates also embark on a daring, if not impossible, rescue mission. As these stories, incredible displays of courage, unfold, voices from around the world come together to encourage Watney's safe return home.

2. Gravity (2013)
Dr. Ryan Stone is a well-qualified bio-engineering physician on her first space mission alongside veteran astronaut Matt Kowalsky (Clooney). This will be Matt's very last in command mission before retirenment. However, during their last space walk before returning home, something goes terribly bad. The ship is destroyed, leaving Stone and Kowalsky completely alone, without a ship or a way to contact the Earth.

As the fear turns into panic, with each mouthful of air the little remaining oxygen is consumed, they have to keep fighting for a way to come home. The unexpected happens here as well, this is a great thriller and when searching for movies like Interstellar it is a great pick!

3. 2001: A Space Odyssey (1968)
When a black monolith is discovered beneath the surface of the Moon, it becomes obvious that it was intentionally buried by an extraterrestrial intelligence. Soon the scientists identify its point of origin, the planet Jupiter, and a team of researchers is sent on an expedition to investigate it. Investigator David Bowman discovers errors in the ship's communications system and finds out more than he wanted to know. This is an all time classic by Stanley Kubrick and it is cited as inspirational for Interstellar writer and director Christopher Nolan. It is truly a movie like Interstellar.

4. Contact (1997)
Doctor Eleanor Arroway, charmingly played by Jodie Foster, receives a smart signal from aliens. Being a famous female scientist, Eleanor, along with other guild colleagues, decipher the message of the friendly occupants of space. They convey to Earth that it would be good to build a machine to communicate between the two worlds.

Contact is an impressive story about the human being who aspires to know the universe with all its mysteries and oddities.

5. Moon (2009)
Sam Bell has been working for three years at the Selene base for the private company Lunar Industries, extracting Helium 3, the precious gas that is believed to be able to solve the energy crisis on Earth. After spending his days in solitude, unable to communicate with his wife, Tess, and his three-year-old daughter by the name of Eve, except through recordings of a defective satellite, the astronaut looks forward to returning home and to take revenge on the family for the long absence. But two weeks before the contract expires, Sam Bell begins to suffer from severe headaches, hallucinations and lack of concentration. When another version of him appears in the database, it is clear that Sam is in trouble ...