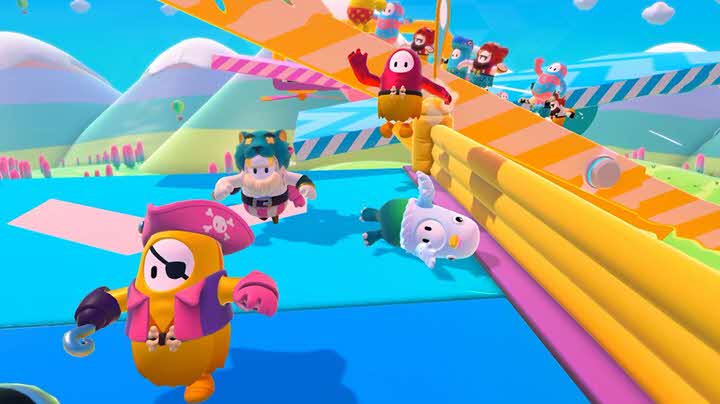 Fall Guys: Ultimate Knockout is an entertaining game to play and has drawn the attention of millions of users. However, there are plenty of games like Fall Guys that are competitive, fun, and interesting to play with your friends and family.

The game industry slowly changes, and mini-games that bring out the competition between players are becoming popular again. Let’s go through the list of games that are very similar to Fall Guys: Ultimate Knockout.

1. Overcooked 2
The second game in the Overcooked series is even more chaotic than the first one. This game is not battle royale like Fall Guys, but it is also extremely fun to play and has the same charismatic nature.

It is a local co-op game where your job is to complete food orders. You can either play with your friends or AI as chefs in a chaotic kitchen that are always moving. The game starts slow, where you and your team must coordinate in order to fulfill orders. Every player needs to be in a different section of the kitchen and do their job.

However, things will definitely turn the other way as the levels go up. It is a very interesting game to play, very similar to Fall Guys.

2. Human Fall Flat
This is another couch co-op game that involves eight players who are stuck together in a chaotic and humoristic dreamscape. You are playing with characters that have the same physical characteristics as sandbags.

Things turn out very funny when you are falling down from obstacles as you are trying to rescue yourself. There will definitely be a lot of laughs as some of the courses are very difficult to get out of.

3. Secret Neighbour
Secret Neighbour is a game that went viral not too long ago, and there is a good reason for that. The humoristic character of the game will make sure you have a lot of fun.

This is another co-op multiplayer game, where you and your friends are starting as a team that wants to rescue their friend from the basement of your creepy neighbor.  However, there is a twist. One of your teammates is the creepy neighbor in disguise, trying to sabotage your rescue mission.

Even though the story is nothing similar to Fall Guys, it has the same charismatic characters but with a creepy twist that you will definitely love. It is a very interesting game and a way to resolve trust issues with your friends.

4. Among Us
In terms of design, Among Us is way behind Fall Guys: Ultimate Knockout, but it is very fun to play and will definitely make you laugh.

Among Us is another local or online co-op where you can play with your friends as a crew placed on a spaceship. You and your teammates should prepare the spaceship before launching, but just like Secret Neighbour, there is an impostor hiding among your crew, and he will do everything to sabotage your launch operation.

Can you imagine pointing fingers to each other when things go backward? – It is hilarious and definitely the same humoristic spirit as Fall Guys.

5. Golf With Your Friends
You might think that this is just another golf game, but you will be wrong. This game brings out the chaotic energy of Fall Guys, where you will be placed with your friends on a maze of explosive courses, with many obstacles.

Your job is to make a pot on each stage faster than a horse on TwinSpires.com Kentucky Derby odds, but things will definitely go wrong, and there will be a lot of laughs between your friends.