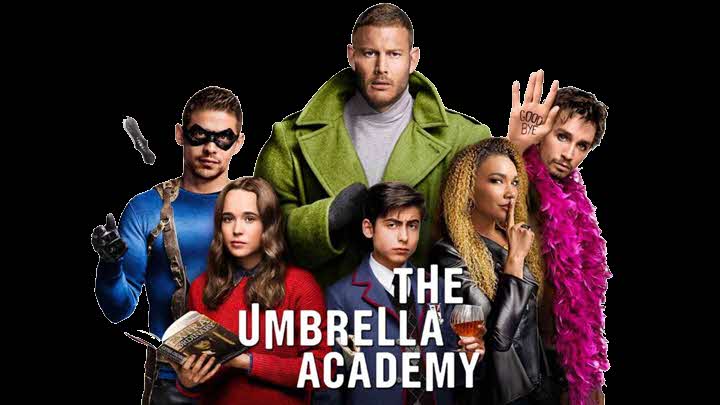 43 women give birth without any of them being pregnant at the start of the day. An eccentric millionaire, scientist and adventurer, Sir Reginald Hargreeves decides to locate and adopt (actually buy) as many of these children as possible and train them. Sir Hargreeves obtained five boys and two girls, six of whom turned out to have amazing skills.

Hargreeves raised the children in his mansion, which he named The Umbrella Academy. With the exception of Number 5, a boy who had the ability to teleport through time and space (and who had disappeared years ago) and Ben, (who died on a very young mission in strange circumstances), the rest of the Academy is estranged from the family due to the abuse of his eccentric father.


Decades later, the surviving brothers join in commemorating the funeral of Sir Hargreeves, whom they hated more than they hate each other. A new separation seems imminent, but Number 5 returns from his trip in time (still a child) to try to avoid the Apocalypse that will happen in a couple of days. Great concept, protagonists with cool superpowers and a shroud of mystery make this show a real treat. Shows like The Umbrella Academy also involve groups of teenagers or young people who either have special powers or work together in unusual ways.

1. Doom Patrol
Doom Patrol is about a group of misfit characters with peculiar abilities who are under the command of the Chief, who rescued them and tried to give them a place to grow as people and have a better life. Throughout the story, we see some characters who come from a cruel past and who carried out actions that made them people of dubious morality become complete saviors when it comes to rescuing the Chief and overcoming the fears that they have not faced for so many years.

The story we can see in this series meets the premise of being funny, devoting time and personality to both the main plot and the subplots, and in provoking such unique situations that the viewer will not be able to avoid laughing out loud or being surprised by such a strange situation. The obvious similarity in plot makes this a great follow-up for fans of The Umbrella Academy.

3. Chilling Adventures of Sabrina
The story of the half-witch, half-mortal Sabrina Spellman, who about to turn 16 must decide whether to live as a witch or stay as a mortal. She must decide soon, because her black baptism is very near.

A ritual in which she signs her name in the devil's book, while she gives him her soul and makes an animal sacrifice in the light of the full moon; but Sabrina decides not to do it, because she does not want to subordinate herself to the devil, and prefers to reject his great powers.

Her aunts Zelda and Hilda are angry about this decision, but they respect it and follow her care at home, while trying to protect her from the dangers that lie ahead. While a little different than the others, for fans of shows like The Umbrella Academy this series will also be a treat as it has similar tones, both appealing to a younger audience but also tackling some more mature current day themes.

4. The Gifted
At the heart of the story of The Gifted, is a proposal linked directly to the heart of the stories of the X-Men. The day a teenager wakes up to his mutant abilities, courtesy of the bullying he gets from a group of guys at a school party, his family's life changes completely. The twist that makes the series, whose first episode was directed by Bryan Singer, lies in the fact that in this world there is no longer a group of mutants commanded by Charles Xavier.

The Gifted proposes a world in which the X-Men have disappeared, although nobody knows why, and the mutants are persecuted by the government, which locks them in facilities created especially to contain them. With no direct connection to films or other series, as is the case with Legion, The Gifted proposes a completely hostile scenario for mutants, who are reduced to a persecuted minority and crushed by a fascist power. A very nice twist and a show like The Umbrella Academy with a slightly darker tone, but well worth the watch.

5. Titans
Dick Grayson is tired of his life as a vigilante and being Batman's assistant, so he moves to Detroit in search of a change in his life. However, it is not long before his past puts him in the path of Rachel Roth, an unusual young woman who is running away from home after witnessing the death of her mother. They in turn meet Kori and Gar, and end up forming an unusual group of young people with extraordinary abilities.

This first series from the DC Universe is a complex story of DC Comics' youthful heroes (who are not necessarily teenagers) in a show that is completely immersed in the mythology of the publisher's characters, who are not afraid to impose limits on themselves. In eleven episodes, the show not only touches on the first announced characters like Robin, Raven, Starfire and Beast Boy, but also introduces us to such exotic characters as the Doom Patrol, Jason Todd's Robin, Hawk & Dove, and Donna Troy (aka Wonder Girl) in an ensemble that is beginning to have more "Young Justice" tones than the actual "Teen Titans" of TV or comics. A must watch for comic book fans, as well as fans of shows like The Umbrella Academy.


More TV, Netflix and Amazon Prime shows to watch if you liked 'The Umbrella Academy'