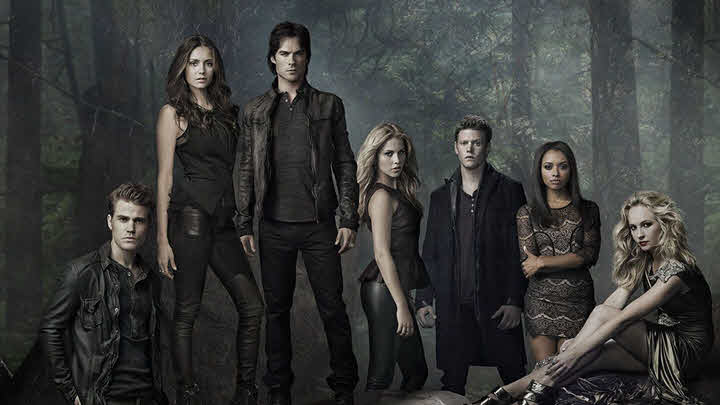 The good vampire Stefan Salvatore and the evil vampire and human devourer Damon are brothers who move to a new town where they become fascinated by this girl called Elena. Stefan refuses to kill people, while Damon doesn’t really care and is a ruthless killer.

Elena doesn't know who they are or what danger is soon to follow, and she quickly falls in love with the "good brother" while Damon becomes more and more of a loose cannon. She resembles an old flame called Katherine, that will soon show up to complicate things for everyone in Mystic Falls.

This is a show about mystery, romance and lots and lots of vampires. If you love shows like The Vampire Diaries, you will certainly love our list.

As a direct spinoff from The Vampire Diaries, The Originals is the obvious first choice when looking for similar shows. Based on the Original family of vampires, we follow the history of the first family.

We have characters returning from TVD like Klaus, his brothers, and even Damon and Stefan at some points.

The Originals is a journey through its characters, the emotionalism and rawness of its story is only surpassed by a story arc that leaves no one indifferent, it is captivating, achieving what few series have - a totally satisfactory closure.

Buffy Summers is one of the last survivors of a long line of young girls with special characteristics that make them relentless slayers. Buffy is a heroine by force, because deep down she wishes she could lead a life as a normal teenager, but she has come to accept her destiny as a spearhead in the fight against all the evil represented by vampires, demons and other evil beings from beyond the grave that infest the town of Sunnydale.

She is guided in her fight by Rupert Giles, a watcher whose mission is to help and train her, providing her with all kinds of information about the diabolical enemies she has to face.

In addition, Buffy is aided by a group of earthly friends who do what they can in her struggles against supernatural forces. A great show like The Vampire Diaries that has a lot of similarities but also a ton of differences that make it great.

True Blood opens with four wonderful episodes that masterfully combine mystery, sensuality, humor and danger. These episodes immerse the viewer in a kind of hypnotic state that makes everything seem interesting, exotic and full of priceless detail.

Its original and different aesthetic within such a hackneyed genre as vampires and similar fantastic creatures made this a classic for the genre, albeit being more targeted towards a more mature audience.

Nevertheless, for fans of shows like The Vampire Diaries, True Blood will satisfy the thirst for blood, action, romance and mystery.

Dean and Sam are brothers with a secret. They are hunters who know that the world is filled with supernatural beings - some that are truly evil and need to be stopped.

They dedicate their lives to stopping the bad ones, driving across the country in a classic Chevy Impala that becomes basically part of the family. As the story unfolds, Sam and Dean have to fight tougher monsters, and even the mighty Lucifer.

They will have to sacrifice everything, including staying alive, to succeed. This is a long series with a ton of twists and turns - and a heap of supernatural beings and events that will keep you constantly coming back for more.

A sequel to The Originals, Legacies focuses on Klaus’s daughter making her way in the world. Several young people descended from vampire, werewolf and witch lineages attend a school where they are taught to control and channel their powers.

However, ready or not, they will have to face terrible threats as they learn. This show is basically The Vampire Diaries with a younger cast, for young audiences, but if you are a real fan of the genre, then this show isn’t one you want to miss.

It really picks up in quality as you progress into the story, and the overall feel is great and satisfying for fans of shows like The Vampire Diaries.