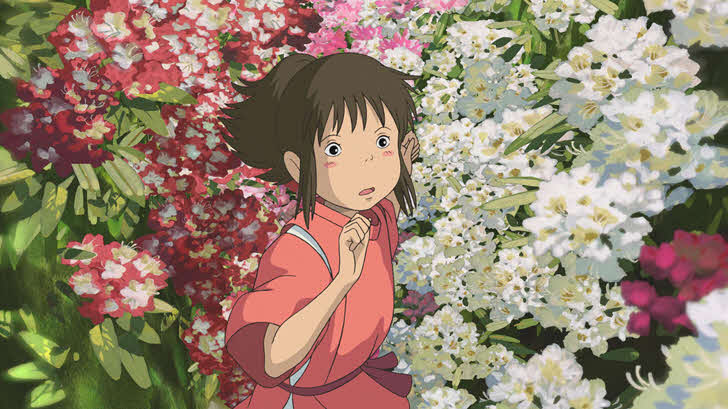 Chihiro is a ten-year-old girl, capricious and stubborn, who believes that the entire universe must submit to her wishes. When her parents, Akio and Yugo, tell her that they have to move homes, she is furious and makes no secret of her feelings.

On their way to their new home, the family takes a wrong turn and appears at the end of a mysterious dead end. The story itself is fascinating because while Chihiro's central goal is simple, everything she has to deal with in between is very entertaining to watch. She has to solve problems that arise, as the story goes forward with good dynamism.

Anime movies like Spirited Away (Sen to Chihiro no Kamikakushi) involve characters that are on a journey where they have to eventually succeed in something, or overcome problems that come their way. All in beautiful Japanese anime fashion of course.

This movie tells the story of Sophie, a 19 year old girl who works in a hat store and has no determined future. One day she decides to go to visit her sister and runs into a group of stalkers but is interrupted by a wizard named Howl who helps her escape.

This wizard is quite popular among the girls in town and especially by the Calamity Witch, who is very upset with Sophie for running into Howl and decides to put a curse on her that turns her into a 90 year old woman.

Seeing that this was not a dream, Sophie decides to leave town and find a way to undo the curse. This journey will be filled with adventures, dangers and mystery, making it a great anime movie like Spirited Away to enjoy.

According to witches' tradition, when they turn 13 years old, they must leave their parents' house and look for a city where their services are required, and stay there for a year. In this way, Kiki will begin the path that will lead her to become a witch for good.

She makes this journey with her friend Jiji, a very friendly black cat, and riding her flying broom. Her initial journey will lead her to settle in a maritime city where she will begin to get to know the world and to know herself.

During her journey she will meet great friends such as Tombo and Osono. A very enjoyable journey of finding yourself and achieving your purpose.

When a ferocious demonic boar attacks Emishi village, young prince Ashitaka puts his life on the line to defend his tribe. With its dying breath, the beast curses the prince's arm, granting him demonic powers while gradually diverting his life.

Traveling west for a cure, Ashitaka arrives in Tatara, the Iron City, where he will partake in a dangerous conflict: Lady Eboshi of Tatara, promoting constant deforestation, rises up against Princess San and the sacred spirits of the forest, who are furious at the destruction brought by the humans.

Our hero will attempt to find the balance and help resolve the conflict for everyone’s benefit. A great watch for fans of anime movies similar to Spirited Away.

The story introduces us to Asuna, a young student who has lost her father at a very young age and who, in her days of solitude, goes to the mountains. Due to a device that she herself created - which uses a crystal that her father gave her when he died - she listens to the mysterious music that emanates from it.

One day she meets a mysterious young man who saves her from a monster guarding the gates leading to Agharta. This is a mysterious land in which there are a number of monsters and humans that keep the world "balanced".

5. The Secret World of Arrietty

Under the foundations of a country house, lives a family of three tiny creatures. Always wary of the possibility of humans discovering their dwelling, these little characters take advantage of the darkness of the night to make incursions and thus collect food or objects to survive.

Arrietty is the only daughter of this miniature family. She is an adventurous girl and eager to know the world, as she has always lived locked up under the small walls of her home and is anxious to know everything that exists out there.

However, Arrietty's monotonous life will change with the arrival of Sho, a sick and lonely boy who will settle in the human's cottage. If you’re looking for more anime movies like Sen to Chihiro no Kamikakushi (Spirited Away), then The Secret World of Arrietty will be a solid choice.

More Anime Movies To Watch If You Loved Spirited Away: