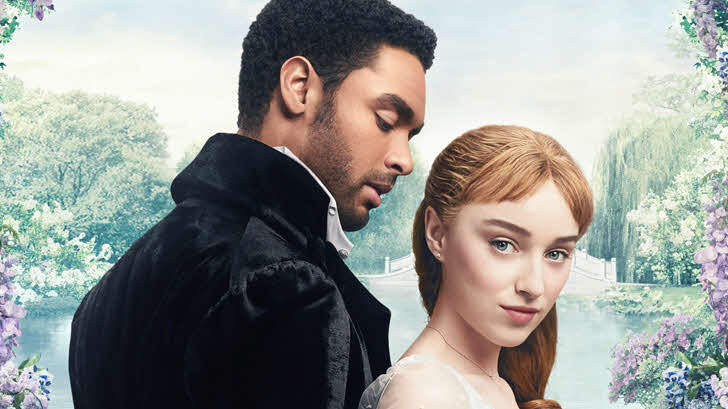 The series takes us to London in 1813. From the hand of the Bridgerton family, and especially Daphne, we see the ups and downs of a wealthy family in England in the early nineteenth century.

Focusing on the young woman, we are shown the wedding season, in which wealthy young women competed to find a husband. In the midst of this situation we meet Lady Whistledown, who, with her diary of scandals and gossip, turns London's high society upside down. During this turmoil we are introduced to the new Duke of Hastings , the most eligible bachelor of the upper class.

Throughout the series, the typical character of the British makes itself felt: their acid tone with everything and everyone. We have drama, romance, great casting and very satisfying storytelling. Shows like Bridgerton usually take place in an old era where we experience the lives and turmoil's of characters living in those periods.

The Spanish Princess revolves around Catherine of Aragon, a young and beautiful princess of Spain who, by way of an alliance with England, was betrothed to the heir to the throne when she was a child. Thus, she arrives in the country with her court and her ladies-in-waiting.

Subsequently, her husband Prince Arthur dies, so that any hope of ascending to the throne seems lost, until the young woman claims that her marriage was never consummated and that, therefore, she has the right to remarry the new heir: Prince Harry, who would later rule as King Henry VIII.

A deep look at the life of Catherine of Aragon that will please fans of shows like Bridgerton with great costumes, intrigue and characters.

The protagonist of "Outlander" is Claire Beauchamp, an English nurse of the twentieth century who, after the end of World War II, decides to go with her husband Frank Randall to a second honeymoon in Scotland.

Up to this point everything seems to be very normal, but things get complicated quickly when Claire touches a stone that she should not and ends up transported 200 years back in time to the 18th century.

She wakes up in the middle of Scotland, at a time of maximum tension between the Scottish clans and the English crown. This, added to the fact that she is English, female, appears in a little white dress and has a temper will surely make things complicated. A worthy watch!

This comedy, "occasionally based on a true story" as it says in its credits, tells the story of Catherine The Great before she was "The Great". When she was brought to marry for convenience to Emperor Peter III of Russia she crashes head-on into the messy, promiscuous life of a man living in the shadow of his father, Peter The Great.

Seeing that Russia is going from bad to worse and that she can make a change, she decides to make a very desperate decision: Peter has to die. But she has to do it in a smart way, as getting caught could have devastating implications.

This show has a more comedic tone but with great costumes and period atmosphere this is a great watch if you're into more shows like Bridgerton.

For decades, feminist historiography has fought to dismantle the myths and customs of traditional "History". A history written with capital letters, in most cases by men, and almost always by the victors.

In Harlots, we take a look at how prostitutes were treated in the 18th century with great attention to detail, attention to setting and, above all, skill in photography.

The pace of the series is slow, and some of its best-shot scenes become exquisitely lit tableaux that take us back to the period of the action through purely visual means. A great period piss that you shouldn’t miss out on.

As a lesbian in the mid-19th century, Anne Lister had to live that part of her life behind closed doors and suffer great disappointments. This amazing script takes us to some of those moments and we can appreciate the difficulties of being different in such a period.

In Gentleman Jack we discover the relationships Anne maintains with the people around her: her relatives, servants, tenants and rivals in the industry. But we also see how she behaves as an aspiring wife.

A lot to digest and learn from in this great period piece that will delight fans of shows like Bridgerton.

More TV, Netflix and Amazon Prime shows to watch if you liked Bridgerton: