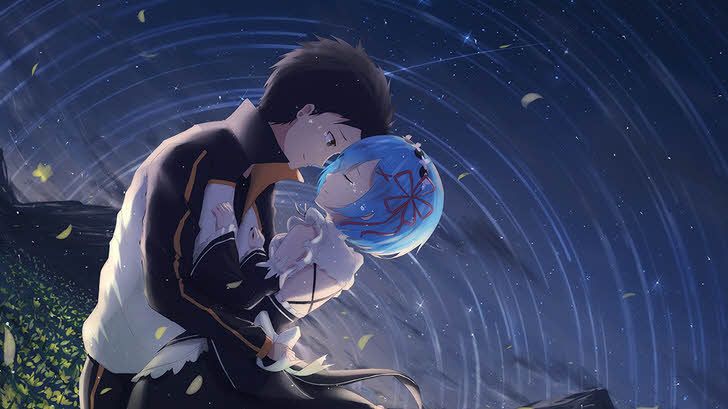 Subaru Natsuki is an ordinary high school student who leads a rather unhealthy life but, one fine day, after leaving a conbini, he is transported to a world of sword and sorcery.

There, expecting all sorts of clichés of the genre he knows from the fiction of his world, he is bailed out of trouble by a beautiful half-Elf named Emilia. Subaru accepts to play the hero and tries to help her recover an emblem that has been stolen from her. Neither of them will know the terrible fate that awaits them, as they both end up being killed.

Only then Subaru discovers that he has the power to rewind his own death to an earlier point in his life, remembering everything that happened before his death. Anime like Re:Zero have captivating stories where the lead characters have the power to control their own destiny.

Okabe Rintarou, an 18-year-old boy obsessed with conspiracies and a self-described mad scientist, finds Kurisu Makise, the young scientist prodigy, stabbed to death in a room after a chat.

After sending a message telling what happened, his whole world turns upside down, and everything that happened seems to be only in his head, especially when Makise Kurisu turns out to be alive and stands in front of him…

What makes this anime even more fascinating is that it’s loosely based on a real story. This is a great anime like Re:Zero - Starting Life in Another World because of the similarity between the characters and the awesome atmosphere filled with mystery and adventure.

Kazuma is not a happy guy but he finally leaves his cave to buy a new video game and just when he was returning home, he is run over by a truck trying to save a girl.

By the time he wakes up, he finds himself in front of the water goddess who tells him that he will be resurrected in a new world that is basically like an RPG game. She makes fun of him for his sad life of failure noting that the girl was never really in danger and he only died in an embarrassing way.

The goddess, out of pity decides to grant the the young man a wish but wanting to take revenge, he wishes the goddess to suffer the same fate as him. As the story progresses, the goddess and our hero provide a great deal of comedic value, as they develop an unexpected bond.

The story follows Satoru, a 29 year old mangaka, who suffers from a strange phenomenon called Resuscitation which allows him to travel back in time to avoid an accident or problem that surrounds him, whether it is the car accident of a child, or the attempted kidnapping of a girl.

Satoru suffers a small accident, discovers the mystery and the culprit of a series of kidnappings that took place 18 years ago in his hometown. With his mother’s life at risk, Satoru decides to travel to 18 years ago to the beginning of all this mess.

He quickly comes to the conclusion that if he wants to save his mother, he must save Hinazuki, a colleague who was and will be a victim of these kidnappings.

Some people with superhuman qualities, called Ajin, cannot die - if they suffer a fatal accident they recover instantly. They can also invoke a kind of black fanstasma of great strength and speed.

Our protagonist is Nagai Kei, an intelligent high school boy who just wants to live a quiet life. One day he is hit by a car and his secret is revealed: he is an Ajin.

Now the government of his country is after him in order to experiment with him. Kei and Kaito run away in the hope that one day they will stop looking for them. They will soon join an army that wants to stop the government from experimenting on Ajin.

Also Recommend: 20 Anime Like The Rising of the Shield Hero

Shun Asanaga is a 15-year-old high school student with an optimistic and bright personality, but he has a cold father who is not even capable of celebrating his own son's birthday. One day, he comes across a mysterious crystal in his father's office. When Shun touches it, the world is distorted, and he is sent to Endra's world.

At the same time, Emilio, the prince of the kingdom of Endra, is about to turn 16 and wishes to take the throne from the usurper Delzain. He attempts to assassinate him in his sleep, but Delzain stops and defeats him with ease, and he is put in prison.

When Emilio is in prison, Shun appears and frees him, escaping when they are surrounded by the king's guards. Shun must return to his own world and Emilio has to complete his revenge. Another top quality anime like Re:Zero kara Hajimeru Isekai Seikatsu you shouldn’t skip!

More Anime shows to watch if you loved Re:ZERO: