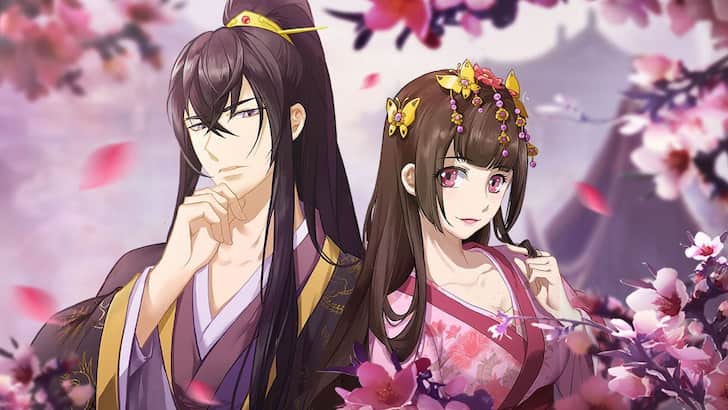 The anime follows Qian Yun Xi, the elder daughter of the Prime Minister Qian. At the age of eight she was sent to live in a secluded Ling Yun mountain due to her psychic abilities. She was always treated as ominous girl due to these abilities.

To make peace between the opposing factions of Qian and Ye Mansions, the king orders Prime Minister to marry his younger daughter to Ye Youming. As Youming is known to be an eccentric and cold person, Qion marries him with Qian Yun Xi instead of his younger daughter.

As expected Ye Youming doesn't care much about his new wife or marriage and abandons her in a haunted palace. Luckily Yun Xi is a Psychic and befriends with the spirits and ghosts in the palace and thus starts the hate-love relationship of our Psychic Princess and Ye Youming.

If you are in love with this anime and are in search of more anime like Psychic Princess (Tong Ling Fei), then check out our list of similar recommendations below.

Also known as Adorable Food Goddess, the anime follows Ye Jiayao an talented chef who loves to experiment with the traditional Chinese recipes. When one such experiment fails she dies on the spot and is magically transported back in time to the imperial China as Ye Jin Xuan, the daughter of a magistrate.

However she is considered as an useless girl due to her lack of fighting skills and is now kidnapped by the group of bandits where she meets Xia Chun Yu. She ends up in a fake marriage with him and must now use her cooking skills to win over him as well as those around them.

This show has a lot of similarities with the Psychic Princess such as romance in historical setting, relaxing story, strong and independent female lead and also an eccentric but good hearted male lead with their love-hate relationship. Hence this is a must watch and our No.1 recommendation for those who are looking for an Chinese anime similar to Psychic Princess. Watch Season 1 of Cinderella Chef (Meng Qi Shi Shen) with English subtitles here.

Another female centric Chinese isekai in our list where our female lead is an assassin in the modern world who gets reincarnated as Su luo in the world of cultivation after she was betrayed and killed by her lover. Su luo was bullied and considered useless due to her lack of spiritual power.

However she now has spiritual energy thanks to the dragon ring she stole in her previous life. With this new found power she tries to turn her life around, but the only problem is that she is always being chased by Wang Jin. He is the most powerful cultivator in the Empire's history and an overbearing tyrant.

Just like Psychic Princess, the lead pair of this donghua too are stubborn to the core and have quirky personalities. We are sure you will enjoy this if you are looking for a donghua like Tong Ling Fei.

Also Recommend: 15 Anime Like The Daily Life of the Immortal King

3. The Story of Saiunkoku (Saiunkoku Monogatari)

The anime follows Shuurei Kou who was born in a poor noble family, her only dream is to become a government official and help the people of her country. But its is not easy for her to realize this dream as women are not allowed in such positions.

However everything changes when she agrees to be an concubine for Ryuuki Shi, the new emperor who prefers men over women. She is tasked to change the lazy emperor into a responsible leader, but will she be able to do it?

This is yet another anime in our list that has strong and independent female lead. You will enjoy this show if you are looking for an Japanese anime similar to Psychic Princess.

4. Memory of Chang’an (Shi Yi Chang An: Mingyue Jishi You)

This is another historical romance donghua that follows Li Qiang, the ninth prince of the empire and Princess Ming Yue. They are forced into arranged marriage by their parents in order to secure the future of their kingdoms.

As the princess is slowly trying to adapt to the new place, she finds out about the schemes planned against her and the royal family.

As seen in the Psychic Princess, this anime too is focused on couple that are forced to marry in order to maintain the peace in the kingdom. Also we will see a similar love-hate relationship between the main pair.

The anime follows a beauty blogger who recommends cosmetics products and makeup tips to her fans online. One day while she was recording a video on road she met with an accident and is now is a vegetative state.

She is now sent to an virtual reality game that targets beauty conscious females. In this game she is equipped with all sorts of make up products and must clear all the makeup related tasks.

Similar to Psychic Princess, this anime too is set in an ancient China with a cold prince who seems to be rude at first but is actually very reliable.