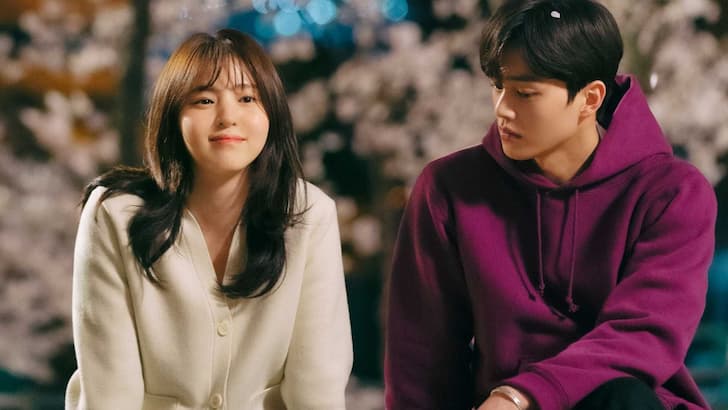 Nevertheless, it is a story about an unconventional romance featuring Han So-hee as Yu Na-bi, Song Kang as Park Jae-eon as the main lead, and Chae Jong-hyssop as Yang Do-hyrok, the second male lead. Na-bi is a dedicated student majoring in sculpture design.

After her humiliating breakup with her ex, she is broken and can’t try to focus on her work. But fate had something else written in her life. She meets a guy in a bar with a butterfly tattoo on his neck (Na-Bi means butterfly), which diverts her mind from everything and she is mesmerised by his presence. Before things go out of her hands, she decides to leave.

Going back to college, she meets the same guy who turns out to be her junior. Park Jae-eon is very famous among girls because of his tall height, perfect smile, and handsome face. He is known for his flings among girls, ignoring all the red flags that Na-Bi gets closer to him. Her relationship with Park Joe-eon provides her with happiness and motivation.

This k-drama is short, but it offers a unique perspective on relationships, friendship, and other topics. The characters are bold, beautiful, and brilliant. There is straightforwardness and no cliché romance.

A distance that is close enough yet not too close to hurt each other A must-watch K-drama portraying a mature relationship example. It has only 1 season, with just 10 episodes directed by Kim Ga-ram. Here is a list of K-Dramas like Nevertheless (Algoitjiman).

Yoon Hye-jin (Shin Min-a) is a professional dentist who moved to a countryside village from a big city clinic after being deceived by the head doctor. She is an idealistic woman who lived by certain principles of being righteous. After moving to the seaside village of Gongjin, she confronts Hong Du-Sik (Kim Sun-Ho).

He is a young, charming guy and a helping hand in the town. He is loved by the elderly people of Gongjin and is very kind-hearted. After several encounters and quarrels between Du Sik and Hye Jin, they started to get close to each other as Du Sik helped Hye Jin settle in the town.

Nonetheless, because both dramas have a distinct storyline and a smoldering romance, Both the K-dramas were trending topics on Netflix K-dramas discussions since the scenes and plot are quite visually appealing with "Slice of Life." This concept makes the audience stand on their heels.

2. The World of the Married (Bubuui Segye)

This K-drama has the highest-rated drama in Korean television history and is a hit on Netflix. Ji Sun-woo (Kim Hee-ae) is a revered family medicine doctor and associate director at Family Love Hospital in Gosan.

Her husband, Lee Tae-oh (Park Hae-Joon), is a movie director and producer who has started an entertainment company with Sun Woo. They both have a son.

A violent twister of falsehoods, disloyalties, and vengeance destroys the apparently completely flawless marriage between a doctor and a movie producer. They all had a perfect family life until Sun-woo got to know about her husband’s marital affair with Yeo Da-Kyung (Han So-hee). The following story is a twister of untruths, betrayal, and vengeance that destroys the apparent.

This may be most related to Korean dramas like "Nevertheless," featuring Han So-hee. These K-dramas have set the standard high for the K-drama world with eccentric character narration and tight hold of emotions throughout the whole series. The direction and cinematography keep the audience engaged.

Love Alarm is yet another drama starring Song Kang as the main lead in the same year. This drama is based on young love and friendship. It was released in August 2019, directed by Lee Na-Jung, with 14 episodes.

Song Kang plays Hwang Sun-oh, Kim So-Hyun plays Kim Jo-jo, and Jung Ga-ram plays Lee Hye-Yeong. The story is based upon an app named Love Alarm, which tracks a person who likes you within a 10-metre radius around you. Sun-oh recently came back to South Korea, and he visited his best friend Hye-Yeong.

He finds out that Hye-Yeong likes a girl and is working late hours to spend time with her. Kim Jo-jo is a poor girl who lost her parents and stays with her cruel aunt. Sun-oh finds interest in Jo-jo and asks her to open the love alarm on the app, despite knowing his best friend likes her.

After dating for a few months, Sun-oh suddenly ignores Jo-jo, taking advantage of the situation. Hye-Yeong consoles Kim Jo-jo and supports her. This drama is about love, betrayal, and Technology.

"Love Alarm" is a Korean drama like Nevertheless, both of them are similar to some extent as they feature catchy visuals and acting performances. It shows the struggle of a relationship with its plotline.

Myul-Mang has a presence as a manager among God and people. He is ill-fated with immortality, and he is enigmatic. He is tried by fate and often causes destruction and misfortune, but on his birthday he promises to fulfil the wish of Tak Dong-Kyung (Park Bo-Young) to make her life doomed and bloom again.

Tak Dong-Kyung is a simple girl who is an editor for a web novel company, living an ordinary life that suddenly turns upside down as she is diagnosed with a brain disease that is soon going to kill her.

After this series of unfortunate events hit, her boyfriend cheated on her, her workplace became messed up, and she was chased by a pervert. The following story is about how Dong Kyung's presence makes the life of Myul-Mang also doomed to be at her service.

It is a drama about an overpowered woman, released in February 2017 and has 16 + 1 special episodes directed by Lee Hyong-min and starring Park Bo-young, Park Hyung-Sik, and Ji Soo.

The drama became one of the highest-rated because of the on-screen romance of the main leads. A Min-hyuk is the CEO of a gaming company and needed a bodyguard as he was being threatened.

Nevertheless, it is added to the list of Korean dramas like "Nevertheless" because both these series have excellent chemistry between their main casts. They also have the essence of comedy, making them binge-watching.

More Korean dramas to watch if you loved Nevertheless: