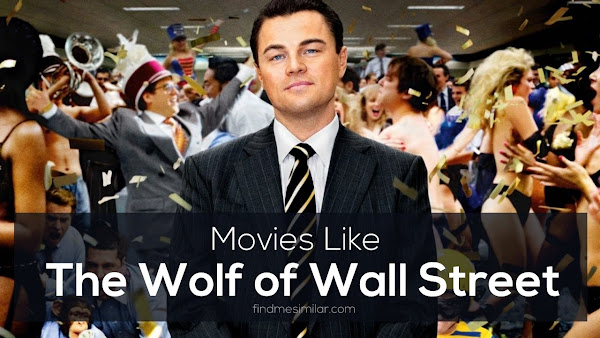 Based on Jordan Belfort's autobiographical novel, the film tells the story of a broker who lived the American dream until it turned into a nightmare. He started from the bottom and had a lightning ascent, and corporate greed, excess success and power gained him from an honest broker to an offender involved in corruption, deception and crime scandals.

Money. Women. Power. Parties. Decadent fun. Drugs. Temptations were on the go and so easy to get. The threat of the law was irrelevant, he could buy anything and anyone. For Jordan and the rest of the pack of wolves, nothing was enough or too much and modesty was for fools.

Similar movies to The Wolf Of Wall Street explore characters out to make money at the very edge of the rulebook, or explore a similar combination of true tales mixed with Hollywood type entertainment, comedy, decadence, success and failure - and some are based at least in part on true stories.

Movies Similar To The Wolf Of Wall Street:

1. Catch Me If You Can (2002)
Frank W. Abagnale (Leonardo DiCaprio) worked as a doctor, lawyer and co-pilot at a popular aviation company - all before he was 21 years old. Master of deception, he was also a very good counterfeiter, earning millions of dollars through false checks. FBI Agent Carl Hanratty (Tom Hanks) has made it a priority to take Frank and bring him to justice, but Frank is always one step ahead of him, forcing him to continue his pursuit.

This movie stars Leo DiCaprio just like The Wolf of Wall Street and has a similar feel in tone, character development and comedic moments - while being loosely based on a real story.

2. The Big Short (2015)
When four outsiders look at what the big banks, the media and the government refuse to see, namely the imminent collapse of the global economy, they have a genius idea: to bet against the banks. Their extremely daring investments will lead them into the dark backdrops of the banking system, where they will have to doubt anyone and everyone.

Based on the true story described in Michael Lewis's bestselling novel (The Blind Side, Moneyball), and directed by Adam McKay (Anchorman, Step Brothers), this movie has a cast consisting of some of the "heaviest" names in Hollywood: Christian Bale, Steve Carell, Ryan Gosling and Brad Pitt.

3. American Hustle (2013)
A fictional film that takes place in the fascinating world of one of the great scandals of the 1970s, American Hustle tells the story of a brilliant scammer, Irving Rosenfeld (Christian Bale), who, along with his seductive and partisan partner, Sydney Prosser (Amy Adams) , is forced by circumstances to work with an FBI agent, full of insane ideas, Richie DiMaso (Bradley Cooper). DiMaso pushes the two into the spheres of power and the New Jersey Mafia, who are just as fascinating as they are so dangerous.

Jeremy Renner plays Carmine Polito, a vehement and opportunist politician from New Jersey who wakes up trapped in a coffin between fraudsters and federal agencies. Irving's unpredictable wife, Rosalyn (Jennifer Lawrence), may be the one to add the drop that will bring the entire building down. Like the other two films of David O. Russell, American Hustle defines a genre of film that is about love, remodeling and survival.

4. Wall Street (1987)
Launched just before the capital market crisis of October 1987, the story in "Wall Street" revolves around a famous stock market broker - Gordon Gekko, who is idolized by his young guild colleague, Bud Fox, eager for affirmation. Bud works around Gekko and quickly learns to lower his conscience and ethical sense. But when Gekko's unorthodox style almost leads to a tragedy, Fox returns to his methods. Unfortunately, his means of destroying Gekko are as dishonest as his old capital market activity.

Also Recommend: 13 Movies to Watch if You Liked Ready Player One

5. Moneyball (2011)
The film is inspired by a true story - that of former baseball player Billy Beane (played by Brad Pitt) - who, failing to be the best on the field in his own right, resigns and becomes manager of the Oakland Athletics team. But in the 2002 championship, Billy faces a very problematic situation: the best players leave the team, attracted by the salaries offered by the big clubs. The remaining players have to settle for a third of their salary.

But Billy is ambitious and determined to win the championship. To complete his team, he calls on Peter Brand (played by Jonah Hill), a young smart economist at Yale. Together, they apply a totally unconventional method in the world of baseball: forming a team using statistics and the computer. Thus, they discover extremely talented players, but who have been ignored or rejected by other clubs on the grounds that they are no longer very young, difficult in character or injured on the field.

More similar films like The Wolf of Wall Street: