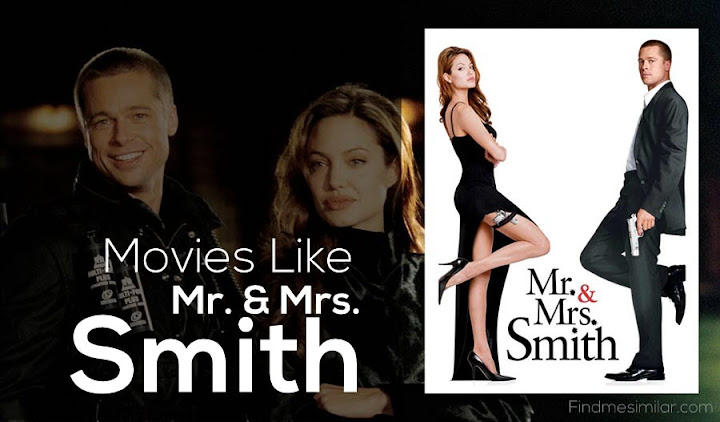 John and Jane Smith are an ordinary couple who live in the suburbs and have a normal, suburban life. Trapped in a boring, monotonous and totally unemotional marriage for five (or six, they are not sure) years, the married life of John and Jane Smith (Brad Pitt and Angelina Jolie) will take a spectacular turn when they both discover that they have the same profession: they are hired killers.

The situation becomes even more complicated when the respective agencies they serve charge them with killing each other. Who will win? Will they go through with it?

When looking for movies like Mr. & Mrs. Smith, we searched for films with excitement, action, strong male and female leads plus characters who lead double lives or have closely kept secrets.

Knight and Day (2010)
Tom Cruise is an undercover agent, and Cameron Diaz is a woman caught between him and those he claims have cheated on him. While their adventure across the globe erupts into a maze of scammers, escaping through the needle's ear, false identities and dizzy romantic awkwardness, they come to realize that they can rely on one another. This is an exciting alternative when looking for Movies similar to Mr. & Mrs. Smith especially because of the interactions and chemistry between the actors when put in these awkward situations.

Killers (2010)
After being abandoned by her ex-boyfriend, Jen (Katherine Heigl) believes in love as much as she believes in Santa. And to make the situation even more difficult, Jen is forced to ... go on vacation with her parents. In the luxurious French Riviera she meets Spencer Aimes (Ashton Kutcher), a guy who is so handsome and so funny, that at that moment seemed to be solving all her problems. Although no one would have believed it, Spencer becomes an exemplary husband over three years and nothing seems to disturb their quiet life in the suburbs. That is until the day when Spencer celebrates his 30th birthday and the bullets start fluttering around them. Quite literally.

Allied (2016)
Allied's story features a British spy service agent, Max Vatan (Pitt) and a French spy Marianne Beausejour (Cotillard). The two fall in love during a mission to assassinate a German official, but in a short time Max learns that his partner, now the mother of his child, is actually working for the Nazis, and begins to investigate. The story is a true one, adapted by screenwriter Steven Knight.

Starring Brad Pitt and Marion Cotillard, if you’re looking for movies like Mr. & Mrs. Smith then this will be right up your alley considering the cast, and the fact that the husband finds out his wife leads a double life.

The Tourist (2010)
While on an unexpected trip to Europe to heal his wounded heart, Frank (Depp) meets Elise (Angelina Jolie), a sensational woman, who intentionally goes out of her way. On the romantic background of Paris and Venice, their story evolves quickly as the two wake up involved in a deadly game of cat and mouse.

The Tourist' uses the same recipe as 'Knight and Day'. But instead of being a 'fast food' meal like Tom Cruise's, this “food” is presented as an elegant restaurant dish.

Wanted (2008)
A young man named Wesley (James McAvoy) learns from the murder of his father that he had been the leader of a mysterious killer organization whose purpose was to maintain world order. Trained by Sloan (Morgan Freeman) and his team, Wesley will try to follow in his father's footsteps. Will he manage to become one of the best assassins in the world, the only one able to print spectacular bullet trajectories?

An action-packed film that has a lot of suspense, twists and turns, special effects and once again, the charm of Angelina Jolie.


More films to watch if you like Mr. & Mrs. Smith: