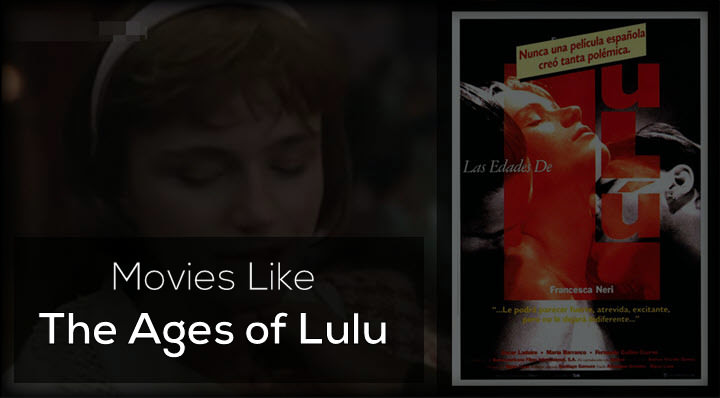 The Ages Of Lulu is a powerful 1990 movie about the sexual decay of a young woman to the sick and dangerous underground world in Madrid.

Lulu is a girl who gives her existence to the discovery of pleasure and the achievement of desire... After a troubled and unaffected childhood, fifteen-year-old Lulu succumbs to the unsettling attraction of Pablo, a young family friend. That first sexual experience marks the life of Lulu, an emotional child, who for years forges a private and ritual relationship with Pablo plunging into the abysses of desire.


Many years later, and married to Pablo, the protagonist will not be able to remain isolated from reality and will surrender to a feverish whirlwind of eroticism without barriers.

This is a difficult psychological movie that explores taboo issues, and movies Like The Ages Of Lulu should all be within range of similar themes.

Erotically Supercharged Movies Similar to The Ages of Lulu:

1. Lies (Gojitmal - 1999)
This South Korean film tells the story of a stormy sexual relationship between a young woman named Y who chooses a sculptor 20 years her senior, J, to lose her virginity to. She wants to avoid getting rap*d like her two older sisters.

Later, in the course of the relationship, the man convinces Y to have sadomasochistic relations where she is beaten and whipped with her consent.

Young Y has an ambivalent position on this situation, where she declares that she likes as well as dislikes this harsh prologue to sex. She also, little by little, takes control of the actions by asking her partner for the things that she likes. Is she in total control now? A perfect follow-up for fans of movies like The Ages of Lulu. Another foreign film with very similar themes.

2. Savage Grace (2007)
The true story of the beautiful Barbara Daly who marries a man of higher class, wanting to climb the social ranks. Their only child is a failure in the father's eyes, thus the boy grows up becoming very close to his lonely mother. One ordinary day something terrible happens.

The close relationship between Barbara and Tony, which becomes increasingly uneven and misguided as the boy gets older, becomes a kind of oedipal complex after which their lives will never be the same.

3. The Story of O (1975)
The Story of O is another movie like The Ages Of Lulu that tells the story of a young woman who is initiated into the world of sexual slavery. It is based on a novel by the writer Pauline Reage published in 1954, which caused a great scandal.

4. Devil in The Flesh (Le malizie di Venere - 1969)
Devil in The Flesh is an Italian movie that follows the perverted passions of a couple, named Severin and Wanda. When the former falls in love with the latter after observing her naked dressing in fur, this leads to a disturbing story of voyeurism and ends in a flood of emotions caused by a childish episode that leads Severin to confuse pleasure with pain.

5. Queen Of Hearts (2019)
Queen of Hearts is a highly glamorous drama, the kind of film that no one has dared to make since Adrian Lyne's last work, Unfaithful, and it could easily have been another guilty pleasure, with emotions running high and luxurious Nordic design interiors.

Anne is a successful lawyer who lives what seems to be the perfect life with her husband, Peter and their twin daughters. The appearance of her teenage stepson, Gustav, upsets the harmony that reigns in Anne's life. What at first seems to be a liberating movement for her soon becomes a story of power and betrayal that will have devastating consequences on her life. A must see for anyone looking for films like The Ages Of Lulu.