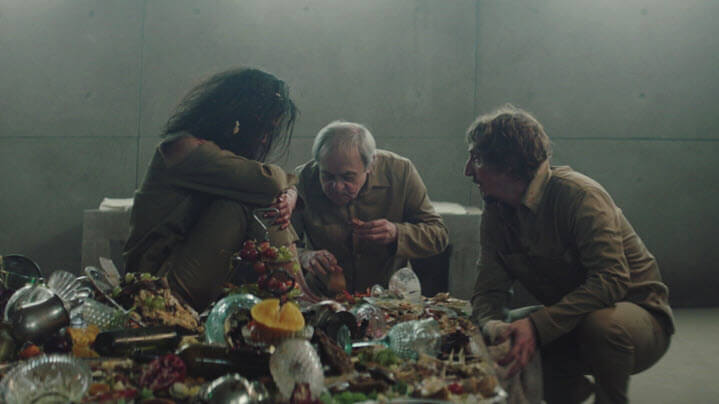 Goreng agrees to live in the hole for six months in exchange for a title, but when he wakes up inside level 48, he doesn't know what awaits him. As his only companion he meets Trimagasi (Zorion Eguileor) a psychopath and murderer, who explains to him how the place where they are locked up works.

Every month they change their level at random, being anaesthetised by a gas and with this they will have access to more or less food and even to nothing. In other levels, Goreng will meet characters like Imoguiri, the admission officer, Miharuwho occasionally goes up and down the platform, looking for her son, and Baharat (Emilio Buale), an important support for Goreng. This movie is mysterious, thrilling and a nice ride for people wanting cool and interesting adventure flicks.


When suggesting movies like The Platform, we aimed for movies where characters are in weird or unknown settings, have to adapt and learn how to survive, and maybe even escape.

Snowpiercer (2013)
A post-apocalyptic story that takes place entirely within a huge train of a thousand carriages. The world as we know it no longer exists: an ice age has devoured everything leaving humanity confined to the enormous perpetual motor machine that prevents freezing with its constant movement. But, on this train, not all cars are the same.

While the compartments closest to the front machine have all the privileges, the rear cars are a ruthless and overcrowded place, the site of the greatest human misery, crass and full of disease. The story begins when a man manages to survive the harsh cold that has consumed the world to get out of the back cars and reach the privileged area. If you want movies like The Platform, this is the #1 must watch.

Parasite (2019)
A static image places us in a house located under the pavement. We can see through its window the outside life, and with a slight panning down, we abandon this view and get into the house, where Gi, the son of a family that subsists as well as he can, is worried about not having a wifi signal. This image, -among many others that swarm throughout the film-, could synthesize Parasite in a precise and concrete way.

Because the film is the universal story of social inequality, but told with a black, acidic and cruel humor, applying these inequalities to our present - with all the opportunities this implies - and showing how feasible it is to reverse the status quo, and whether it is finally possible to move from the underground to the surface. Even if this means literally becoming a parasite. An Oscar winner and a great recommendations for fans of The Platform.

High-Rise (2015)
In High-Rise the law of the jungle is lived, it is the fight of man against his equals, the social escalation and the annoyance it causes, the pedantry of the upper classes and their extravagances, presented through a chaotic narrative whirlpool.

In a luxurious and sophisticated building, in which there is everything from a supermarket to a swimming pool and even a school live different types of people, from different social classes, located according to their status. It is a clear class system. The highest category is on the upper floors, and so from there downwards the tenants are placed. Are things about to change?

Cube (1997)
Surprising and distressing, its beginning could not be more frightening: a group of seven people, after being drugged and kidnapped, are released into a strange cube-shaped enclosure. In principle, they have no relationship with each other: their professions do not coincide and they do not know each other, so they do not understand what "the motive" is that has led them to be held captive. What is this thing? How to get out? They will try, and will have to face the consequences of their actions.

Circle (2015)
This tells the story of Mae (Emma Watson), a young lower-middle class woman, who lives a routine, boring life in a horrible job that frustrates her, and on top of that her Dad (Bill Paxton), has multiple sclerosis, which his insurance, does not cover at all.

Everything seems to be a disaster in her life, until one day, her friend Annie gets her an interview for a dream job at the digital company The Circle, a company that provides authentication solutions to users.

This company seems perfect, a good salary and many benefits, but as Mae gets to know the life inside this circle, she discovers that soon she will have to immerse herself completely, in this lifestyle, leaving her friends and family outside. Also a great watch for fans of movies like The Platform, this one has a top cast of characters and very good acting as well!