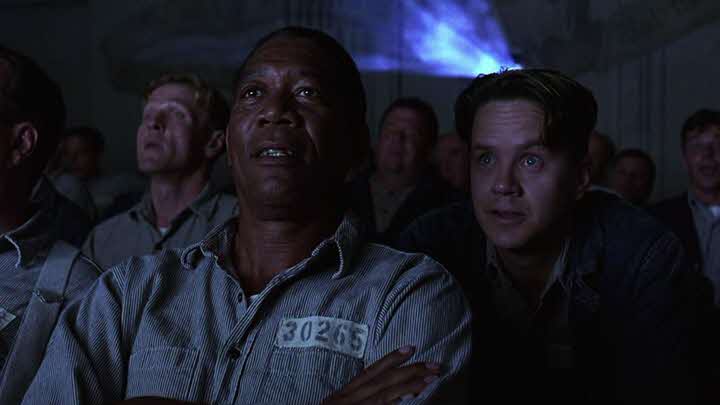 "Red" has been in Shawshank prison for years, sentenced to life in prison for murder. He and the rest of his gang made peace with the place, they're comfortable, the days go by. The walls that used to lock them up, as time goes by, become shields that protect them from the outside world. However, Red differs from the others in something they use as a joke: he is the only prisoner who admits he is guilty of his crime. He is our avatar in the Shawshank prison.


Andy Dufresne is a very well wrapped Christmas gift, which both the other characters and we the viewers discover from the minute zero until the end of the film. His low-key performance and the way he naturally accepts both good and bad sounds boring to read but is most interesting to watch in action. It's not clear from the start whether he really killed his wife and lover or was wrongly imprisoned, but it doesn't matter. We don't live in a just world, we live in this one. And as Andy himself admits, bad luck is running out and sometimes you get two life sentences. This is one of the best movies every made, so if you want more movies like The Shawshank Redemption, this list is as close as it can get:

Movies Similar to The Shawshank Redemption:

1. The Green Mile (1999)
Paul Edgecomb, a century-old resident of a nursing home, is haunted by memories. Chief Warden of Cold Mountain Penitentiary in 1935, he was in charge of ensuring the smooth running of capital executions, striving to make the last moments of the condemned more bearable.

Among them was a giant named John Coffey, accused of raping and murdering two girls. Intrigued by this candid and shy man of magical gifts, Edgecomb will form strong bonds with him and understand that miracles exist and can come from anywhere at any time.

Set in southern North America during the Great Depression, if you want more movies like The Shawshank Redemption, 'The Green Mile' is also based on a novel by Stephen King and directed by Frank Darabont.

2. The Prestige (2006)
Set in London at the end of the 19th century, the film shows us a society where magicians and illusionists were the most renowned entertainment figures of the time. Two young people try to reach the top, on one hand Robert Angier who has a sophisticated style and great reach to the people. On the other hand Alfred Borden, a great genius in terms of creativity, but without the skill required to reach people with his interesting ideas.

His great friendship and companionship ends in enmity when his great trick ends in failure. From that moment on both will try to destroy each other. While the story is quite different, if you like movies like The Shawshank Redemption this movie has a very similar feel, with a very satisfying ending that ties everything together well.

Also Recommend: Movies Like Call Me By Your Name

3. The Mist (2007)
The premise of this movie is quite simple. The action takes place in a small town in the state of Maine, when a storm generates damage to nature, as well as negative consequences on the facade and electricity of different premises and homes. Almost immediately, characters in the film and spectators witness the appearance of a mysterious fog. While stuck in a supermarket, they have to decide how to act, as the mental health of our characters slowly starts to degrade into chaos. Once again based on a book by Stephen King, making it a must watch for fans of movies like The Shawshank Redemption.

4. Escape From Alcatraz (1979)
The film is set in the 1960s in San Francisco. Frank Lee Morris is locked in Alcatraz, a maximum security prison, due to his long history of escapes. He has been imprisoned for drug trafficking and armed robbery, but this time, the prison warden reminds him that he will not be able to get out of there, since it is an unbreakable prison located on a rocky island in the middle of San Francisco Bay. Morris quickly befriends other prisoners, especially Charlie Butts, who occupies the cell next to his. Among all the inmates, they try to plan a new way to escape from Alcatraz. Based on a true story, this movie feels very similar to the Shawshank Redemption in the goal and plan of escape by the characters.

5. Brubaker (1980)
Wakefield Prison in the State of Columbia is a facility where dangerous convicts from all over the country serve hard labor sentences. A new inmate is admitted there and subjected to all kinds of harassment by prison guards. However, it is soon discovered that the prisoner is none other than Henry Brubaker the new warden of the prison. Since he did not trust the supposedly official reports, he had decided to check the operation of the centre himself and find out whether the prisoners' complaints were justified.

Once he had made his identity clear, Brubaker began the complicated reform plan. But his new ideas soon collide with the corruption of the guards. Everything will become even more complicated when Brubaker discovers indications that numerous prisoners have been randomly killed and buried in camps near the prison. Another look at the tough life experienced in prisons, which echoes Shawshank to perfection.