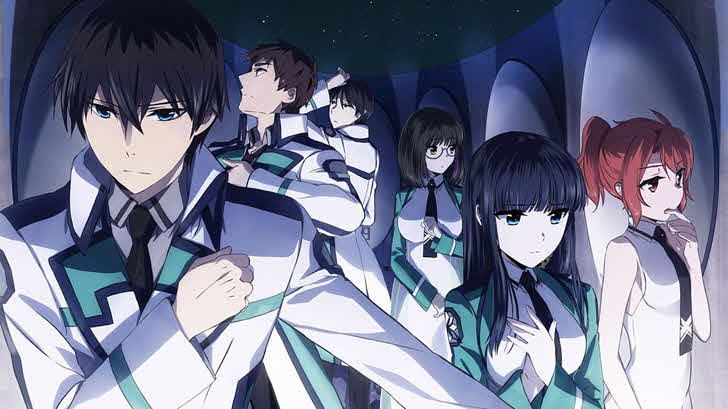 Complex magic systems, youth and school settings for learning powers, or seemingly unwinnable challenges and confrontations appeal to everyone with a taste for a bit of adventure. Something that The Irregular at Magic High School (Inscription) seems to try to do at first.

An "advanced Supernatural user" of these techniques became a "Magic Technician". Magic Technicians (after all mere magicians) are nurtured by magic through High Schools and Universities. This is a story about Tatsuya, an older brother somewhat useless and clumsy in magic; and Miyuki, a perfect sister and more than young high achiever sister.

The two siblings are enrolled in the same magic school. Together they will have to overcome challenges and go through several adventures that will test their skill and their courage. Anime like The Irregular at Magic High School (Mahouka Koukou no Rettousei) focus on magic, fun characters and unlikely heroes. This is our list of similar anime:

1. Chivalry of a Failed Knight

Some people with supernatural powers are known as Blazers. They can materialize a Device which is a weapon made from a person's soul. Ikki Kurogane, a student at an academy where magical knights are trained, is known as the worst student and is therefore in the lowest rank.

This anime touches on several genres including fantasy action, romance and ecchi. First of all, the fantasy action is the most motivating thing to sit down and watch this series. The fights involving the students are quite formidable for several reasons, such as their appreciable animation (a visual marvel) and how dynamic they are.

They are one-on-one confrontations where everyone brings their Blazer skills to the fore, giving us some great spectacles. Magic, cool action sequences and the academy setting make this the perfect anime like The Irregular at Magic High School to enjoy.

Rikka, also known as Asterisk, is The City Academy on the water, the scene of the world's greatest tournaments and battles, including the "Star Wars Festival".

Ayato Amagiri, one of the Star Pulse Generation, comes to Rikka as the request of the Seidōkan Academy's student council president, Claudia. Each character in this anime fights for different reasons, they all have something to save or find.

A peculiar and attractive thing is the different types of fighting in the anime and their spectacular weapons, from a Japanese katana to futuristic weapons almost with a soul of their own, to melee. The battles are entertaining and exciting, especially when the FESTA starts.

3. Aesthetica of a Rogue Hero

The story follows an international training organization called Babel. This organization protects young people returning from other worlds. A hero named Akatsuki has returned to the real world from a magical world called Alazzard, accompanied by a beautiful girl who is the daughter of the demon king.

They will train their skills both with weapons and magic, according to the skill you get when you go to another world, and even the exam they have is based on combat. But that only happens in two chapters.

Otherwise, they are ecchi scenes, to make sense of the genre that it is. An anime with a lot of action which should be exactly what fans of anime like The Irregular at Magic High School are looking for.

The story is about a vampire who from one day to the next, that is to say, in less than 3 months, has any number of women after him so that he can suck their blood.

The plot is divided into several arcs, between 3-4 episodes, where the bad guy is different and a new Kojou's "mojabraga" is introduced.

Our protagonist has to learn to use his powers, and fast, in an unforgiving world where a lot of bad people are out to get him. An anime with action, blood and a great lead will keep you watching for hours on end.

Also Recommend: 15 Anime Like The God of High School

The series begins when Layfon arrives in the academic city of Zuellni with the intention of studying administration.

After a series of events, he is literally "forced" to train in military arts and enlist in the 17th division.

The combination of hard-hitting music, fights with swords, rifles and weapons of all kinds, a plot that grabs you from the first episode and an impressive animation quality, makes Chrome Shelled Regios one of the MUST watch series for the fans of anime similar to The Irregular At Magic High School.

Also Recommend: 15 Anime Like The Misfit of Demon King Academy

More Similar Anime shows to watch if you like 'The Irregular at Magic High School':

6. Classroom of the Elite
7. The Fruit of Grisaia
8. Full Metal Panic!
9. Legend of the Galactic Heroes
10. The Misfit of Demon King Academy
11. No Game No Life
12. Sword Art Online: Alicization
13. Code Geass
14. Akashic Records of Bastard Magic Instructor
15. The Daily Life of the Immortal King