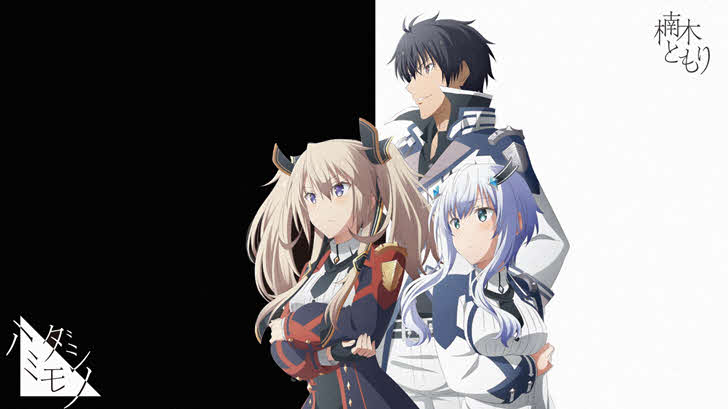 After centuries of relentless war between humans and demons, the demon king Anos Voldigoad makes a deal with the human hero Kanon. He sacrifices himself to separate the human and demon realms for 1000 years so that peace can flourish in the respective realms. This way he hopes to reborn in a calm and peaceful future.

2000 years has been passed since Anos sacrificed himself and the demon race has build an elite Demon King Academy tasked to identify the true demon king upon his reawakening. However after reincarnating, Anos he finds that the magic has been weakened from his time. After enrolling in the Demon King Academy, he learns that his legacy has been falsified by an unknown impostor.

His lack of knowledge of the falsified history and his unmatched powers makes him the misfit of the academy. Anos must now make his significantly weaker descendants recognize that he is the true demon king while uncovering the imposter who has falsified his legacy. When looking for anime like the misfit of demon king academy (Maou Gakuin no Futekigousha), we focused on the overpowered protagonist with legendary traits and lots of action.

1. The Irregular at Magic High School

set in a world where magic exists and is been improved through modern technology, not every one has an aptitude for magic. In Japan, those with the magical power are treated as mere commodities and are trained in nine special high schools for magic.

The anime follows Tatsuya Shiba and his sister Miyuki Shiba who are enrolled in one of those magic school known as 'First High School'. Here the students are divided into two groups based on their aptitude for magic. "Blooms" those with higher magic aptitude are enrolled to first course while "Weeds" are those with lesser magic affinity enrolled to second course.

Miyuki in assigned to First Course due to her high magic affinity, however Tatsuya is a second course for being magically inept. However, his amazing technical knowledge and unique combat abilities make him a misfit and irregular for the schools evaluation standards.

Both the main protagonists of The Misfit of Demon King Academy and The Irregular at Magic High School are considered weak and misfits in the stating but are actually overpowered when it comes to combat. Thus we think this is a must watch and #1 in our list of recommendations for anime like the misfit of demon king academy.

Also Recommend: 14 Anime Like The Irregular at Magic High School

2. How Not to Summon a Demon Lord

The anime follows Takuma Sakamoto, who plays the character of the unrivaled demon king Diablo in the fantasy MMORPG game know as Cross Reverie. Thanks to his rarest artifacts and unique skills, he overpowers all those who challenge him. However he suddenly gets transported into an magical world in the Diablo's appearance with his artifacts and skills.

In this new world he is greeted by Rem and Shera, two beautiful girls who summoned him. When they try an enslavement spell on him thanks to his magic ring that reflect magical spells they both end up becoming the slaves to Takuma.

Also Recommend: 14 Anime Like How Not to Summon a Demon Lord

The anime follows Akuto Sai who transfers to Constant Magical Academy, hopes to become the high priest one day and change the world for good. However on the very first day of his school his aptitude test predicts his future occupation as a Demon King.

As his destiny spreads, his school life becomes complicated with fellow students resenting him and a female android falling in love with him. He is determined to not let his destiny control his fate and must now fight his misfortune head-on.

Like the misfit of demon king academy this too is a battle harem anime in a magical academy setting. This anime has a heavy emphasis on ecchi.

When an unmotivated middle aged salaryman dies in an accident, he is reborn as a child in a new fantasy world where magic exists. When his family in this new world was attacked and killed by demons he is saved by Merlin Walford who decides to raise him as his grandson.

He names the child as Shin Walford and trains him in the ways of magic and combat. Due to their life in the secluded forest shin lacks the common sense and the socializing skills. To overcome this Merlin joins him in the best Magic Academy of the kingdom where Shin must learn more about the world and make now friends.

Both Anos and Shin are overpowered heroes in their respective worlds surrounded by a lot of beautiful girls. Another well made anime with great story for you if you enjoy anime like The Misfit of Demon King Academy.

After running successfully for twelve-year the popular DMMORPG game YGGDRASIL is all set to shut down its game servers. However, Momonga a skeletal "Overlord" character in the powerful guild of the game decides to spend time in the game until the very last moment.

Surprisingly his is still in the game after the servers are shut down and observes the NPC characters slowly developing their own personalities. Momonga decides to take on the name of Ainz Ooal Gown and lead the NPC characters to make his own empire in this new world.

Both Ainz and Anos are powerful demon lords in their worlds with their own set of hardcore followers. A bit dark in comparison to The Misfit of Demon King Academy, I am pretty sure you will enjoy this if you like the overpowered characters showing of their superior magical powers.

More Similar Anime shows to watch if you liked The Misfit of Demon King Academy:

6. Demon Lord, Retry!
7. The Devil is a Part-Timer!
8. Chivalry of a Failed Knight
9. The Legend of the Legendary Heroes
10. Aesthetica of a Rogue Hero
11. High School DxD
12. One Punch Man
13. World Break: Aria of Curse for a Holy Swordsman
14. Akashic Records of Bastard Magic Instructor
15. Noblesse
16. Classroom of the Elite
17. The Daily Life of the Immortal King