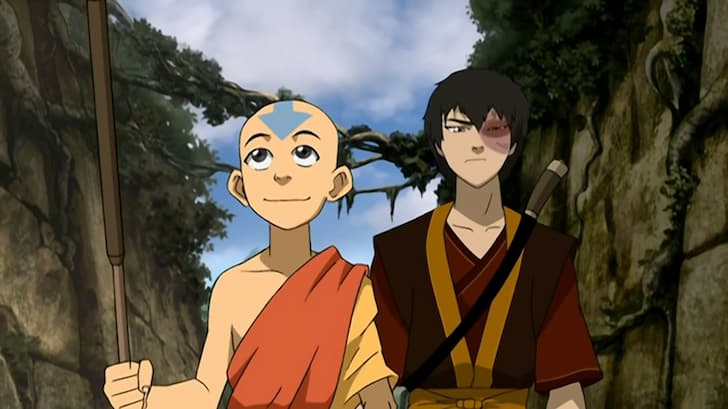 Avatar: The Last Airbender seems to be more popular now than when it aired in 2005. The cartoon is an engaging, fantastical adventure that revolves around Aang and his friends. Aang is a 12-year old boy who partners with his friends to fight against an authoritarian regime.

He uses his extraordinary ability to manipulate fire, water, earth, and air. The Airbender’s story has stood the test of time. So it is no wonder why it continues to appeal to most anime fans around the world. However, it is surprising that the movie has timeless relevance, so uncommon for kids’ cartoons. Serious issues ranging from classism to genocide keep you at the edge of your seat when you watch it.

Avatar is the kind of film that will make you miss its heroes after you finish watching. But don’t sweat it because we’ve got you covered with some shows that may help to fill the void. Here are twelve similar animated series to include in your next binge-watch.

We can quickly tell that the writer (Aaron Ehasz) of the Avatar co-created the Dragon Prince. The series takes place in the fairyland of Xadia. It features three youngsters embarking on a journey to end the dark magic that has caused civil unrest in their lands. Does it sound familiar?

It has everything we admire about the Last Airbender. The film has fairy creatures, magical elements, an engaging storyline, and great fighting scenes.

If you are looking for an American anime with enormous public affection, may we introduce the Boondocks? Like Avatar’s Aang, Huey is a young boy who carries the weight of the world on his shoulders. He sees through everyone, and he’s constantly trying to wage war against a crushing system.

If one of your reasons for liking Avatar is its societal relevance, you will relish the Boondocks.

If you like the feel-good episodes of Avatar, then you’d enjoy a more chilled one. In Noragami, we encounter a homeless god (Yato) who fights phantoms to garner worshippers with his unique ability. You can expect various super-charged fighting scenes.

But the film’s biggest asset is its Japanese influence (more like Avatar’s twin version). If you like the Japanese culture, don’t shy away from Noragami.

American Dragon is about a 13-year-old Jake who tries to fulfill his familial duty of becoming the first American Dragon. His task requires him to shield New York’s magical creatures.

Like Avatar, the show explores martial arts and what it’s like for a child to cope with everyday pressures.

5. Magi: The Labyrinth of Magic

If you enjoyed how Avatar explores Asian folklore, you would like the Magi: The Labyrinth of Magic.  Like Avatar, the film explores several fantasy characters. There are also various magical systems to relish. The film revolves around two young boys that explore a fabled dungeon for rich lore.

You will also find similar themes present in Avatar, like lineal and friendship bonds.

Teen Titans is one of the well-liked superhero anime shows of its time. You cannot immediately draw comparisons with Avatar. But it explores similar topics and character development. The film series features Raven, Beast Boy, Cyborg, Robin, and many others in their plight to protect the world from an army of villains.

Also Recommend: 19 Anime Like That Time I Got Reincarnated as a Slime

Steven Universe feels like Avatar’s twin brother as it explores the theme of unity. The film centers on the titular character (Steven) and his adventures in the fictional Beach City. He lives around a team of mythical creatures known as “Crystal gems”. Steven surveys his magical abilities and joins his family to save the world from the legendary Gem Empire.

Another mind-blowing alternative to the Last Airbender is Kino’s Journey. Like Airbender, it is about a young heroine (Kindo) who tours the globe with her talking motorcycle to learn about the world and herself. It is the same adventurous system as Avatar but more unfettered. There’s chaos and beauty on the open road.

9. Nadia: The Secret of Blue Water

Nadia: The Secret of Blue Water is an excellent show that will leave you begging for more. The Air bender draws inspiration from Asian folklore. On the other hand, the classic English Literature inspires the Nadia film. Despite their varying origins, the two films share a similar goal: protecting the world against evil.

The film is about a 14-year old circus performer (Nadia), a French inventor (Jean), and Captain Nemo. Somehow, the trio teams up to save the world from the shackles of the Neo-Atlantea Empire.

Available for purchase on Amazon

10. Kipo and the Age of Wonderbeasts

Kipo and the Age of Wonderbeasts tell the story of a young girl (Kipo) who strays to the surface of a post-apocalyptic world. Kipo feels optimistic when she meets four friends—a mutant pig, an invincible bug, and two human beings. Kipo and her friends strive to protect the world from a villain (Mandrill) who wants to enslave humanity.

Much like Avatar, the Kipo film explores endless, adventurous imagination. It is safe to say that the film is one of the most promising animated series similar to Avatar out there.

11. Moribito: Guardian of the Spirit

12. She-Ra and the Princesses of Power

She-Ra and the Princesses of Power follow the tale of Adora, a teenager who has magical powers. Adora teams up with other princesses to defeat the villainous Lord Hodak and his allies.

What’s more? The film has an excellent friendly enemy relationship between Adora and Catra. It is similar to Zuko and Aang’s relationship from the Avatar.

If one were to describe Avatar and what makes the 12 films mentioned above follow in its footsteps, it is its phenomenal protagonists. It also portrays Asian folklore. Avatar and these 12 similar films have proven that action anime shows have come to stay.

These films have also illuminated the world and shown that children can make heroic choices for their community.

Author Bio: Leon Collier is a blogger and academic writer from the UK. He works in a company that help writing college papers. He likes trying new subjects and is always focused on proving his worth in new and challenging writing areas. His hobbies are reading books and playing tabletop games with his friends. You can reach him via Twitter @LeonCollier12.