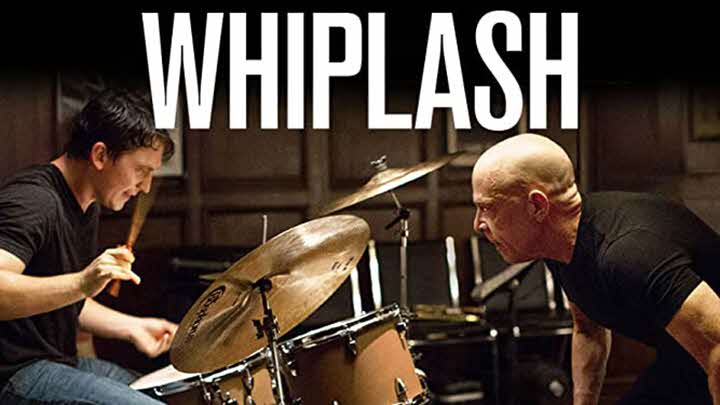 Follow the story of Andrew Neiman, a drummer who is studying jazz at the Shaffer Conservatory and wants to be the best, better than anyone else, like a karate master but with the drums. He finds himself practicing alone, sweating and giving it all he's got when Fletcher, the director of the conservatory's study band enters. Fletcher is not just any kind of director, he's very tough. Strict to a fault and this is in direct conflict with Andrew.

Fletcher starts abusing psychologically and pushing Andrew's abilities further and further. Andrew pushes himself and seems to go crazy on several occasions. This pursuit of perfection and greatness begins to greatly affect his personal life and how he sees himself.


Movies like Whiplash also focus on strong, complex and ambitious characters that strive to achieve perfection in their field, or try to follow their dreams without letting anything get in the way.

1. Black Swan (2010)
Many times parents have the joy of seeing some of their goals not achieved in the past fulfilled by their children. But sometimes this desire to see the child become what the person himself could not be, becomes an obsession that is nothing more than a feeling derived from fear, fear that creates insecurity in the children who in the end, appropriate a model that perhaps not even corresponded to them.

This is Nina, a professional dancer who at 28 years of age lives with her mother, a tireless protector who does not allow her any distraction. Even today, Nina lives and is treated like a child, so she lets him watch the film in her room full of pinkish shades and the "immature" treatment that her mother has with her. The dream of this dancer is to win the role of the main character in the famous ballet of Swan Lake. She has everything to achieve it, her style and fine figure prove it, but she puts pressure on herself, restrains herself and has to essentially give a part of her mental health to land the role. Was it worth it? A stunning movie that will make you think. Our top recommendation if you’re looking for movies like Whiplash.

2. Nightcrawler (2014)
The "night patrol" is a concept that will sound familiar to many: journalists who have a nightly schedule and a specific job: to be on the lookout for high-impact news; traffic accidents, robberies, street fights, fires or any other incident that breaks public order.

This is what the protagonist of this story, Louis Bloom, is dedicated to, a middle-aged, lonely, very observant man of few and strong words, who learned the trade empirically, watching a couple of nights how it was done. One day he witnesses an accident with an injured person exposed, and discovers that this provides him with an opportunity, but at what cost? This movie studies obsession with your job and the sometimes unhealthy desire to achieve your goals regardless of the toll it can take. A great follow up when looking for movies like Whiplash.

3. Uncut Gems (2019)
A jewelry store owner who is also a hustler is looking to make a lot of money. The year is 2012 and the Boston Celtic face the Philadelphia 76ers in the NBA East Conference semifinals. A rough diamond rock arrives at the jewelry store and captivates the Celtics’ star player, who immediately creates a connection with the object that, according to him, will help him win the series. For Ratner, our protagonist it's the perfect opportunity to bet on the superstitious and unsuspecting star.

With debt on every corner of New York and tension in a broken home, he begins a disturbing exercise in high tension that absolutely never stops for 130 minutes. He will do anything to make money, will lie to anyone and will get himself in very tough spots. A different look at obsession, and if you want more movies like Whiplash, this a very good alternative that will keep you on the edge of your seat.

4. Birdman (2014)
Birdman is the story of a nervous, emotional, mental breakdown; the story of a man with a hunger for transcendence who wants to escape from an old role as a summertime Hollywood blockbuster actor. And he tries to do so with the full intention of seeing himself as an artist; or, rather, of being recognized as an artist. Until then, Riggan Thomson was just the guy who dressed up as a bird and defeated villains: celebrity is not synonymous with acting. Or so they say; and that's what he's starting to believe. Another Oscar worthy movie which you need to see if you like movies like Whiplash.

5. First Man (2018)
The story of the trip to the moon has been told countless times. It is one of the recurring stories of modern dreams in the cinema and literary imagination. That was the halo of mystery that covered the astronauts at the top of the space race; and that was the idolatry that was always carried, with an equable smile, by Neil Alden Armstrong, a young engineer from Ohio who achieved one of the most unsuspected achievements of humanity. This is his story, a story of hard work, ambition, and literally shooting for the stars. When watching movies like Whiplash you should definitely not miss this gem.