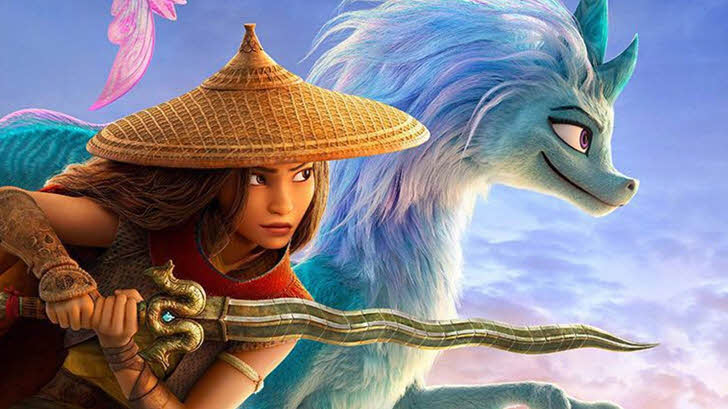 This movie tells the story of a fantastic world called Kumandra, where humans and dragons lived together long ago in perfect harmony. But when evil forces threatened the land, the dragons sacrificed themselves to save humanity. Five hundred years later, those same evil forces have returned and Raya, a lone warrior, will have to find the last legendary dragon to rebuild a destroyed world and reunite her people.

For years, the villagers have fought to possess the gem that saved humanity, but in a meeting to restore order and peace in the villages, in an excess of confidence due to a false friendship within the group, the gem breaks into five fragments and the evil that surrounded them turns everyone into stone.

Movies like Raya and The Last Dragon are animations that are great for both adults and children that focus on friendship, courage and the supernatural. Take a look at our list of recommendations below:

Best Movies Similar to Raya And The Last Dragon:

1. How To Train Your Dragon

Hiccup is a Viking teenager. He lives on Mema Island, a village constantly besieged by ravenous and destructive dragon attacks. Hiccup's father is the chief of the tribe and is disappointed that his son is a boy who, physically, does not meet the "standards" of the typical Viking: he is lanky and clumsy with weapons.

He possesses other valuable virtues, such as wit and intelligence, he is also intuitive and respectful, but these are not qualities that are much appreciated in a Viking; on the contrary, he is the mockery of the villagers. Hiccup, for his part, wants to prove that he is a warrior worthy of his father and is eager to slay a dragon.

He has invented a weapon to do so and one night, during one of the attacks, he manages to tie one up, but when he is about to kill it, he takes pity on the beast, frees it and...becomes its friend. This friendship will change his life and, eventually, the fate of the village. The perfect movie like Raya And The Last Dragon for obvious reasons.

Moana belongs to a tribe (Motunui) settled on an isolated island of vast extension and great mountains from which they are forbidden to go beyond the reefs.

No one knows exactly why, but they follow the orders of their father, the chief. Moana is already 16 years old and will be in charge of leading them all. When food becomes scarce due to strange circumstances, she feels the need to go to the deep ocean.

This inexplicable call of the young girl will lead her to discover the true origins of her community and herself, after embarking on a risky journey convincing the demigod Maui to restore the stability of her people.

After receiving the healing powers of a magical flower, the newborn princess is abducted from the palace by Mama Gothel, who knows of the power of the healing flower in Rapunzel's hair, which she will use to preserve her youth forever.

To keep the secret of the princess's hair, Gothel locks Rapunzel atop a tower. As the years go by, Rapunzel is now a young girl tired of being confined, curious to explore the world and contemplate the floating lights. Opportunity presents itself when a bandit, Flynn Rider, climbs the tower and is captured by the heroine.

Flynn and the princess come to an agreement: he will show her the world and the place where the floating lights that she has observed every birthday come from. And so together they embark on an enjoyable adventure.

Also Recommend: 20 Movies Like Lord of The Rings (Series)

Enthusiastic and big Po is a panda bear crazy about kung fu, a hobby that doesn't quite fit with his job at the family's noodle restaurant. But when fate wants Po to be the one chosen to fulfill an ancient prophecy, all his dreams come true.

He will plunge into the world of kung fu to study with his idols, the legendary Furious Five: Tiger, Crane, Mantis, Viper and Monkey, under the leadership of their guru, Master Shifu. But the vengeful snow leopard Tai Lung is preparing an attack - and Po must defend the village.

Will he be able to realize his dream of becoming a kung fu master? Po will try his best, and this unexpected hero will discover that his greatest weaknesses are also his greatest strengths.

Zootopia tells the story of Judy Hobbs, a rabbit who, against all odds in her environment, manages to graduate as a policeman and the opportunity to work as such in the big city that gives its name to the film.

But, despite her efforts and her excellent grades, the police force does not take her seriously, believing that being a rabbit she is too small and cute to work as a policewoman, so she is relegated to giving tickets to cars. Judy, having worked all her life for her dream, is not intimidated and decides to investigate the disappearance of several predatory animals in the last few weeks.

To do so, she enlists the help of Nick Wilde, a fox who makes a living ripping people off for a living and who, unlike Judy, is a cynic who doesn't share the police's enthusiasm for the city. A heartwarming movie like Raya and the Last Dragon.

More Movies To Watch If You Loved Raya And The Last Dragon: