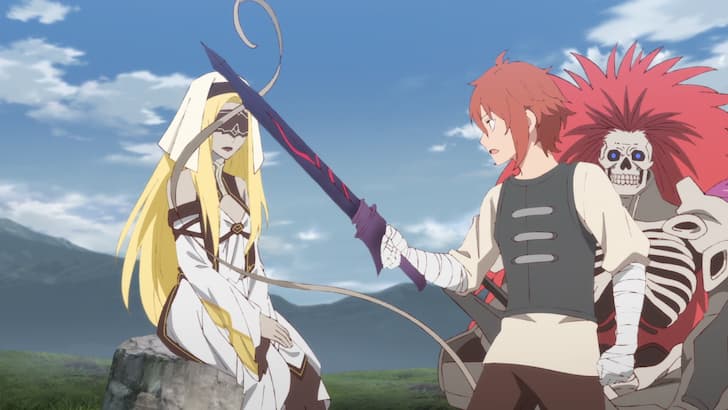 Anyone is likely to scare themselves to death if they wake up and find a skeleton, a ghost and a mummy in front of them. Luckily for Will, the three of them decide to raise him and teach him various aspects of life. Slowly he grows up and the day approaches when he must go on his own journey.

He has to swear an oath to the god of his choice and subsequently he will receive his blessings according to the strength of that oath.

If you a fan of the show and are looking for more anime like The Faraway Paladin (Saihate no Paladin) that takes us on an adventurous journey of an overpowered main character, then here are some similar recommendations for you.

What better anime to start with than the one which was used as an inspiration by the author of The Faraway Paladin. Similar to it, here we encounter a 34 year old guy who gets reborn as a child in a different world.

Here his name is Rudeus Greyrat and interestingly he remembers everything from his past life. As a result, he tries to use his experience to explore his new life and overcome all the difficulties he faced in his original world. Maybe, he can also find love in that venture.

Young Prince Bojji is tired of the people calling him "The Useless Prince". Yes, he may not have the physical prowess required in a king but his unwavering determination is unmatched. One day he comes upon a shadow-like creature called Kage and forms an unlikely friendship with him.

After that Bojji decides to go on a journey accompanied by his friend so that he can improve his qualities as a king. Ranking of Kings follows the same base as The Faraway Paladin where the main character ventures into an unknown adventurous journey.

This anime is set in a world where God has abandoned everyone. The consequence was that neither new life can come forth nor the dead can depart.

It is the job of the grave keepers to put the dead to rest with a proper burial ceremony. We follow one such grave keeper named Ai whose father arrives in her village and kills everyone.

Ai accompanies her dad on a journey after that, as she learns more about this godless world. Similar to The Faraway Paladin, in this anime big emphasis is given to leading a life that is fulfilling.

4. Rokka: Braves of the Six Flowers (Rokka no Yuusha)

When the Demon God was finally revived, the goddess of fate decided to choose 6 heroes who would go on to stop the demon god. Adlet Mayer is one of those heroes who meet a fellow hero named Nashetania Loei Piena Augustra.

The duo decides to meet up with the other heroes at their designated place where they find seven total heroes.

Now, Adlet needs to quickly find this imposter before all the suspicions begin falling on him. If you have loved Saihate no Paladin, you will also get addicted to this anime which has a similar setting.

5. That Time I Got Reincarnated As a Slime

That Time I Got Reincarnated as a Slime has a lot of similarities to Saihate no Paladin. In this anime, we will see Satoru Mikami getting reborn in a different world as slime.

There everyone recognizes him as Rimuru Tempest and he gets some overpowered stats and abilities. One of the abilities being able to absorb anything and take up its appearance.

Will Satoru be able to face up to the challenges of this new world or will he crumble to pressure?

Also Recommend: 20 Anime Like That Time I Got Reincarnated as a Slime

More Anime shows to watch if you liked Saihate no Paladin:

6. Natsume's Book of Friends
7. Tsukimichi: Moonlit Fantasy
8. To Your Eternity
9. Grimgar: Ashes and Illusions
10. By the Grace of the Gods
11. The World’s Finest Assassin is Reincarnated Into a Different World as an Aristocrat
12. Is It Wrong to Try to Pick Up Girls in a Dungeon?
13. Wise Man’s Grandchild