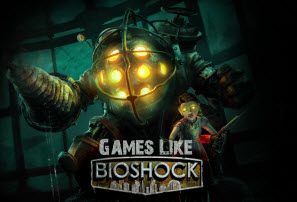 BioShock is a first-person shooter with role-playing game customization and stealth elements developed by Irrational Games, and published by 2K Games. In 1960, a lone survivor of a plane crash named Jack discovers an abandoned underwater utopia, only to find out that the mystery behind its creation is much more sinister than he first believed. If you are a fan of First-person shooter games like BioShock and looking for more games with similar gameplay then find the recommendations for it below and don't forget to mention if we miss any games as we keep on updating this list.

System Shock 2 is an action role-playing survival horror video game for Microsoft Windows. The game takes place on board a starship in a cyberpunk depiction of 2114. The player assumes the role of a lone soldier trying to stem the outbreak of a genetic infection that has devastated the ship.

Singularity is a first-person shooter with survival-horror elements developed by Raven Software and published by Activision and released for Microsoft Windows, PlayStation 3 and Xbox 360. The player take on the role of Captain Nathaniel Renkoa, an US Air Force pilot provided with an artifact known as the Time Manipulation Device (TMD) which can manipulate time.

Borderlands is an action role-playing first-person shooter video game, that was developed by Gearbox Software. Borderlands is set on the planet of Pandora. Lured by its apparent vast deposits of minerals, several colonization ships sponsored by the Dahl Corporation journey to the planet and build settlements there.

Amnesia: The Dark Descent,....if you can think of more, then don't forget to mention it in comments.