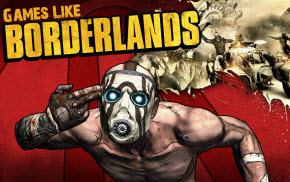 Borderlands is an action role-playing first-person shooter video game, that was developed by Gearbox Software. Borderlands is set on the planet of Pandora. Lured by its apparent vast deposits of minerals, several colonization ships sponsored by the Dahl Corporation journey to the planet and build settlements there. If you are a fan of first-person shooter action RPG games like Borderlands and looking for more games with similar gameplay then find the recommendations for it below and don't forget to mention if we miss any games as we keep on updating this list.

Rage is a first-person shooter video game developed by id Software. The game is set in a post-apocalyptic near future, following the impact of the Asteroid 99942 Apophis on Earth. The game primarily consists of first-person shooter and driving segments, with the player using his vehicle to explore the world and travel between missions.

S.T.A.L.K.E.R. is a series of first-person shooter survival horror video games developed by Ukrainian video game developer GSC Game World for Microsoft Windows. The games are set in the area surrounding the Chernobyl accident site, called ‘The Zone’, in an alternative reality where a second explosion occurs at the Chernobyl Nuclear Power Plant some time after the first and causes strange changes in the area around it.

Dead Island: Riptide is an survival horror action role-playing game developed by Techland and published by Deep Silver. It is the second installment in the Dead Island franchise where the survivors Crash-land into another zombie-infested tropical island, the nightmare starts all over again leaving hope drowning in the rising tides.

Hellgate: London, is a dark fantasy themed action role-playing game developed by Flagship Studios. The game is set in demon-infested postapocalyptic London and can be played in either third person perspective or first person perspective.